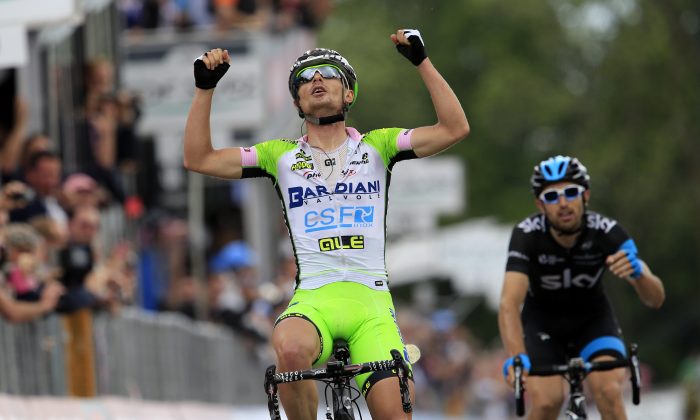 Bardiani rider Enrico Battaglin celebrates his victory as he crosses the finish line of the Stage 14 of the 97th Giro d'Italia, 164 kme from Aglie to Oropa (Biella) on May 24, 2014 in Oropa. (Luk Benies/AFP/Getty Images)
Cycling

Battaglin Wins Another for Bardiani in Giro d’Italia Stage 14

For the second day in a row, a rider from the small Continental squad Bardiani-CSF joined an early break and persevered to the end to win a stage of the 2014 Giro d’Italia.

In stage 14 it was Enrico Battaglin who rode the entire 164-km stage in the break, over three categorized climbs, then made a surprising push in the final several hundred meters to catch and then pass the stage leaders on the Cat 1 summit finish.

Battaglin had lost some time on the final climb, but made the extra effort to real in the leaders in the final 500 meters. He then timed his sprint perfectly, taking the lead ten meters from the finish line.

“Until the final kilometer I didn’t believe it could happen, because I had already given a lot—I’d been in the break all day, which had taken a great deal out of me,” Battaglin told Cyclingnews. “Then I saw that they were just ahead of me and I only thought about giving all I had left.”

“In the sprint I lost a few meters right away, then I gritted my teeth and saw that both Cataldo and Pantano were struggling. I passed them in the final 20 meters. I only just managed it. It was a great victory, very emotional.”

The stage was important for Maglia Rosa wearer Rigoberto Uran of Sky, as well. Uran wasn’t able to respond to attacks ont he final climb, and ended up losing time to most of his General Classification rivals. The Sky rider still wears the race leader’s pink jersey, but he faces two progressively tougher mountain stages; if today showed his true form, the race lead could well change hands in the near future.

Four Climbs and a Summit Finish

The 164-km stage started with a Cat 3 climb as a warm-up before three consecutive climbs, a Cat 1, Cat 2, and Cat 1 summit finish. The first Cat 1, Alpe Noveis was eight km long and averaged eight percent, with ramps up to 16 percent. The Cat 2 Bielmonte was 18 km long at 5.6 percent, and the Cat 1 climb to Oropa was 12 km long at 6.2 percent, both with sections of 13 percent grade.

This was a serious set of hills, sufficient to stress even some of the good climbers if they weren’t having the best of days.

With the General Classification contenders assure to be watching each other on this stage, all the smaller teams saw Stage 14 as a great chance for a breakaway win.

With so many teams represented but no GC threats in the bunch, breakaway riders had every reason to hope they might stay away.

Matteo Rabottini of Neri Sottoli was next to attack, followed by Bardiani’s Stefano Pirazzi. This set up two groups chasing the break on Bielmonte, with Rolland’s group four-and-a-half minutes back and Haas, Rabottini, and Pirazzi another 45 seconds back.

The pace on the climb cut into the breakaway; fewer than a dozen were still struggling to stay ahead in the final few kilometers of the ascent.

Some of the breakaway riders hooked up with the chase groups; Rollands quintet added another Europcar rider, Perrig Quemeneur, and Movistar’s Gorka Izaguirre.

Tinkoff-Saxo’s Nicholas Roche attacked the break near the summit of Bielmonte, crested first, collecting the King of the Mountain points, and charged down the far side on a 30-kilometer descent. He couldn’t stay away though; the rest of the break caught him two-thirds of the way down the descent.

After Roche was caught, BMC’s Manuel Quinziato attacked, with Giant-Shimano’s Albert Timmer on his wheel. This pair led the rest onto the lwoer slopes of the final climb, where Quinziato had the disastrous luck to have a mechanical failure. He got a replacement bike, but he had lost too much time to hope for a stage win.

Timmer pressed on alone, opening a gap of about a minute on the rest of the breakaway. Behind him the Rolland group had shrunk to four; the peloton was now reduced to ten riders, five minutes back. Fewer than two dozen riders had any chance at all of winning the stage, and the toughest part was just starting.

KOM jersey holder Julian Arredondo of Trek made an attack seven km from the summit, trying to put pressure on race leader Rigoberto Uran of Omega Pharma-Quickstep. Uran was out of teammates, as was former pink-jersey-wearer Cadel Evans, who was marking Uran’s every pedal stroke.

With six km left to climb, Albert Timmer was looking a little tired. He still had 45 seconds on the remaining breakaway riders when two of them, Sky’s Dario Cataldo and Lampre’s Mattia Cattaneo, set off in pursuit.

In the Maglia Rosa group, Arredondo wore himself out, but Movistar’s Nairo Quintana was ready to take up the charge. With 4.5 km left to climb he took the lead and injected some pace; the group was now 4:30 from Timmer, still leading the stage.

With four K left, Timmer was looking shaky but holding a 36-seond lead on Cataldo and Cataneo; the four left in the Rolland group were 3:30 back, but not gaining ground, and the Maglia Rosa group, led by Quintana and Pozzovivo, was 4:15 back and gaining ground.

300 meters further up the hill Pozzovivo launched the attack everyone had been expecting, but only Quintana and Rafal Majka were able to respond. For a while Gorka Izaguirre, dropped from the Rolland group, managed to ride along to support his teammate Quintana.

Ahead of this group, Cataneo had fallen back from Cataldo to be replaced by Colombia’s Jarlinson Pantano. Cataldo and Pantano caught Albert Timmer two km from the summit; the Giant-Shimano rider refused to surrender, and tried to follow.

Cataldo attacked Pantano; Pantano responded. Then the Colombia rider tried an attack of his own, but it fizzled out almost immediately; he didn’t have the legs.

Timmer clawed his way back to the leading pair; Lampre’s Jan Polanc, who had also been in the break all day, also pushed himself up to the leaders. This quartet came into the final kilometer of the race just seconds ahead of some of the remaining breakaway riders, including Nicolas Roche and Bardiani’s Enrico Battaglin.

Timmer cracked finally and completely 800 meters from the line; the other three pushed on. Battaglin caught them with 500 meters to go; Polanc dropped off a few hundred meters further on.

The remaining trio started watching each other; Cataldo refused to lead, not wanting anyone to get a jump on him, while Battaglin stayed third wheel, looking tired.

Finally Cataldo started riding, leading the trio through the final few turns. He slowed for the final turn 150 meters from the line, then took off, briefly dropping Battaglin.

Pantano tried to sprint, but was too tired. Battaglin, however, had been saving his legs for a final burst. He waited until Cataldo started sprinting, then launched his own attack. He caught Pantano 75 meters out, then reeled in Cataldo, caught him, and cut around on the right, passing the Sky rider in the final ten meters before the line.

Enrico Battaglin (L) crosses the finish line ahead of his Sky’s Dario Cataldo (R) ten meters from the finish to win Stage 14 of the Giro d’Italia. (Luk Benies/AFP/Getty Images)

The remaining nine breakaway riders struggled across the line through the next minute. Ryder Hesjedal and Pierre Rolland crossed next, all that was left of the group they had led.

Back in the Maglia Rosa group, Nairo Quintana had shaken of Domenico Pozzovivo. The Movistar climber crossed the line 2:39 down, followed by Astana’s Fabio Aru at 2:43 and Pozzovivo at 2:47.

Rigoberto Uran finally made it at 3:04; he had been unable to answer any of the attacks, and had lost time to almost all his rivals. The Omega rider still held the pink jersey by 32 seconds, but if he was struggling on the first mountain stage, what chance did he have on the next two, each of which was progressively harder?

Stage 15 is long, at 225 km, and not particularly challenging—until the final 20 km, the Cat 1 climb to Plan di Montecampione. This 19-km climb starts off at eight percent for the first 11 km, drops to a comfortable four percent for a few K, then climbs back up at nearly nine percent for the final five km.

It is guaranteed that GC hopefuls will attack here, particularly after seeing Rigoberto Uran struggle on the climb to Oropa. Further, Monday will be a rest day; riders can go all-out knowing they will be able to recover.

Of course, after the rest day, riders will face one of the toughest stages of the race. Stage 16, 139 km from Ponte di Legno to Val Martello, starts and finishes with Cat `1 climbs, and in the middle is the legendary Hors Categorie Stelvio, the highest point of the race (9,045 feet above sea level) and one of the tougher climbs in all of cycling. Though the average gradient is 7.4 percent, it ramps up to 13 percent in places. And it is long—24 km long.

The Stelvio is also cold. Often closed by snow even at the end of May, it ascends by several dozen switchbacks to a height so great it has its own weather system.

And that is only the second climb of the stage, which ends with a Cat 1 summit finish. The climb to Val Martello is also long, at 23 km, and averages around six percent, but ramps up to 11 percent in the final two hundred meters.

Every rider’s weaknesses will be found out in these two stages. Every climber’s team will be tested as well. Quite possibly the 2014 Giro could be decided in these two days.