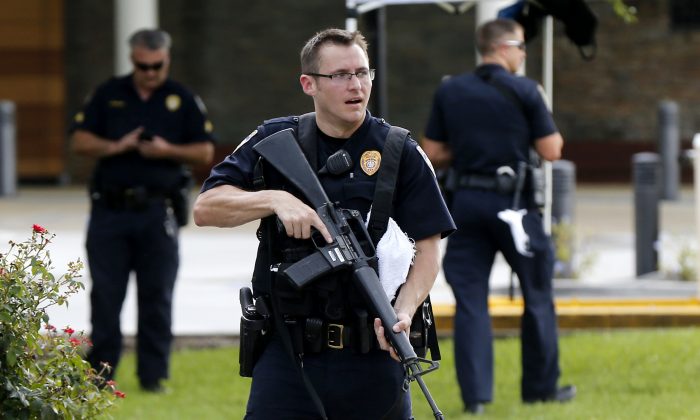 Police guard the emergency room entrance of Our Lady Of The Lake Medical Center, where wounded officers were brought, in Baton Rouge, La., Sunday, July 17, 2016. Multiple law enforcement officers were killed and wounded Sunday morning in a shooting near a gas station in Baton Rouge, less than two weeks after a black man was shot and killed by police here, sparking nightly protests across the city. (AP Photo/Gerald Herbert)
Crime and Incidents

BATON ROUGE, La.—The man who killed two police officers and a sheriff’s deputy in Baton Rouge was a former Marine sergeant who served in Iraq and had no known ties to any extremist groups.

Gavin Eugene Long, a black man whose last known address was in Kansas City, Missouri, carried out the attack Sunday on his 29th birthday. Police say he was seeking out law enforcement and ambushed them, wounding three other officers before he was killed in the latest in a string of violent incidents involving police.

According to military records, Long was a Marine from 2005 to 2010 and rose to the rank of sergeant. He served in Iraq from June 2008 to January 2009, and records show he received several medals during his military career, including one for good conduct. Long, who received an honorable discharge, was listed as a “data network specialist” in the Marines.

After the Marines, he attended the University of Alabama for one semester, in the spring of 2012, according to university spokesman Chris Bryant. University police had no interaction with Long during that time, Bryant said.

Oren Segal, director of the Center on Extremism for the Anti-Defamation League, said there was no information linking Long to any known extremist group or movement, but the ADL and others were investigating Long’s possible use of aliases.

Sunday’s incident was the latest in a series of deadly encounters in the United States involving police and black men that have sparked a national debate over race and policing. It also came less than two weeks after 37-year-old Alton Sterling, a black man, was fatally shot by police in Baton Rouge in a confrontation that sparked nightly protests and has reverberated nationwide. Police-community relations in Baton Rouge have been especially tense since Sterling’s death.

In Kansas City, police converged on a small turquoise frame house listed under Long’s name. An Associated Press reporter said some officers had weapons drawn from behind trees and others were behind police cars and unmarked cars in the residential neighborhood in the southern part of the city.

Missouri court records show that a Gavin Eugene Long filed a petition for divorce from his wife in February 2011. The online court records don’t say why the couple divorced, but the petition indicates they had no children and that Long had represented himself. Three months after the divorce petition was filed, his ex-wife was granted restoration of her maiden name. Last month, on June 7, a case against Long by the city of Kansas City over unpaid city earnings taxes was dismissed.