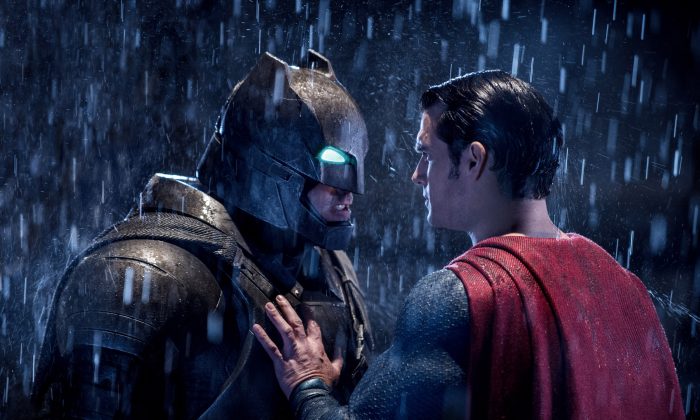 NEW YORK — “Batman v Superman” may be a massive movie — a $250 million globe-trotting blockbuster with a pulverizing marketing assault — but it’s just the opening salvo of a much larger campaign that aims to restore DC Comics to prominence in Marvel-dominated multiplexes.

It has not gotten off to a great start. Before audiences rush this weekend to see the superhero showdown of “Batman v Superman: Dawn of Justice,” critics treated moviegoers to a smackdown of their own. The poor response — “godawful” was one of the harsher but not uncommon judgments — may mean little to opening weekend box office. But it suggests “Batman v Superman” may not be the ideal flagship for a new armada of DC adaptations.

“This movie is going to make money almost certainly. But more important is how people are leaving the movie theater,” says Cowen & Co. senior media analyst Doug Creutz. “If they walk out feeling kind of ‘eh,’ it’s a problem.”

That’s because “Batman v Superman” is meant to trigger a new world order for Warner Bros. and DC Comics. The studio home to DC characters since 1969, Warner Bros. was once the leader in bringing superheroes to the big screen, from the Christopher Reeve’s Superman movies to Tim Burton’s Batman movies to Christopher Nolan’s “Dark Knight” trilogy.

Zack Snyder’s “Batman v Superman” is the first of 10 films planned by Warner Bros. and DC for the next five years. And it’s the first film to bring DC characters into a single “extended universe,” an approach modeled on Marvel’s “Avengers”-centered success. “Batman v Superman” may be a prize-fight showdown, but its undercard players (including Wonder Woman, Aquaman and the Flash) are being teased for future installments.

Warner Bros.’ dominance has slid recently (it ranked third among studios in market share the last two years), while Marvel Studios, paired with the Walt Disney Co., has proven one of the most lucrative and reliable juggernauts in an otherwise unpredictable media landscape. “Batman v Superman” hopes to bring the other heavyweight in comics back into the ring.

“This is everything. This is the entire DC universe being rebooted with the two most iconic characters in their canon,” says Jeff Bock, senior box-office analyst for Exhibitor Relations. “This is the start of everything they need to compete with Marvel and Disney. And they are the one studio that can definitely compete at that level. This is their biggest gun.”

Perhaps sensing their firepower wasn’t all-powerful, Warner Bros. delayed the film, originally slated for last July, to March, a less chest-thumping but also less competitive debut than the middle of the summer.

Yet poor word-of-mouth may slow “Batman v Superman” down only so much. Analysts still expect the film, set to appear on just about every IMAX, 3-D and large-format screen around, to open around $150 million in North America and about $300 million globally. (It’s opening simultaneously in China, where stars Ben Affleck and Henry Cavill began the film’s worldwide promotional tour.) Fandango says advance ticket sales domestically are outpacing previous superhero movies.

Since Kevin Tsujihara became Warner Bros.’ chief executive in 2013, maximizing the profitability of DC Entertainment has been one of the company’s central goals. It’s a prime engine not just to its theatrical division, but in television (where more than half a dozen primetime shows are in production, including “Supergirl,” ”The Flash” and “Arrow”) and its interactive units.

It has meant a change in philosophy at Warner Bros., which is owned by Time Warner Inc.

“Even with ‘The Dark Knight,’ we never really thought about what the next movie was going to be,” says Charles Roven, a producer of DC adaptations going back to 2005’s “Batman Begins” and extending to many future installments. Roven told reporters recently that it’s a balance of planning the overall franchise while leaving room for filmmakers to be distinct.

And that has been one of the principle differences from the approach shepherded by Marvel Studios president Kevin Feige. While Marvel releases are cohesive and homogeneous, Nolan’s three films and Snyder’s two are more obviously distinguished by each filmmaker. Such an approach has produced the most revered superhero films of all — Nolan’s acclaimed “Dark Knight” series — but Snyder’s more bombastic style has been far more divisive. His “Man of Steel” (a fine but not super $668 million worldwide) was a disappointment to many fans.

The two directors (Nolan is an executive producer on “Batman v Superman”) have mapped out a darker, grimmer and more political tone for DC superheroes in contrast to the largely comic, family-friendly Marvel releases.

The next test will come on Aug. 5 with David Ayer’s “Suicide Squad,” an all-villain team-up starring Will Smith, Jared Leto and Margot Robbie. “Wonder Woman” with Gal Gadot follows in June 2017, after which a two-part “Justice League” lands.

Considering that 20th Century Fox’s R-rated “Deadpool” has grossed more than $600 million in five weeks, each is probably a dependable blockbuster. But they may not get the lift from Batman and Superman that they were counting on.