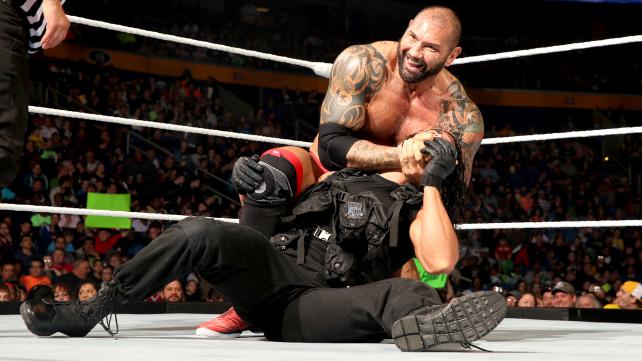 Batista WWE Return: Evolution to Replace Wrestler as He Goes on Hiatus?

Batista and the rest of Evolution were rumored to face The Shield at Payback but other rumors say that there won’t be another 3 vs 3 match, and instead be all singles matches.

Batista’s comeback is considered by many to be a failure and it looks like it might be over soon.

WrestlingInc notes that Batista still isn’t being advertised for any upcoming WWE television tapings, or the Payback pay-per-view.

“The latest word was that he will work Payback with Evolution in a rematch against The Shield. There was talk of doing a six-man rematch or three singles matches,” it said.

Another possibility is replacing Batista with someone else to battle with Evolution.

Batista is taking a route The Rock took, getting into acting gigs. He’s going to be taking time off to promote the upcoming Guardians of the Galaxy, which he’s in, and he also has other film projects in the work.

The way his comeback floundered left him without the title in favor of fan favorite Daniel Bryan.

Now fans and wrestling writers aren’t sure what’s going to happen with him.