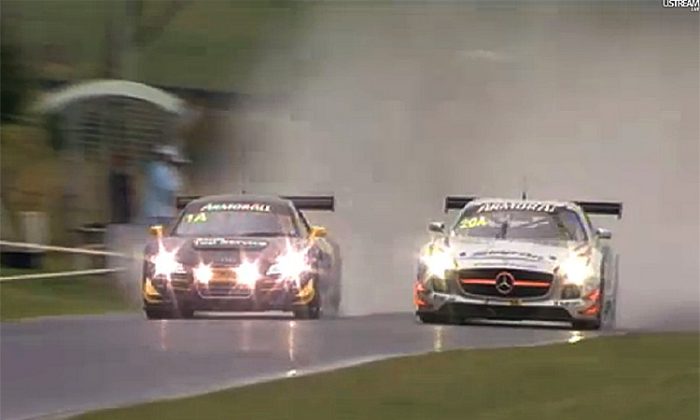 Almost lost in the fog is the spectral shape of the expired #2 Audi. (bathurst12hour.com.au)
Motorsports

Rain that won’t go away; in fact, rain that keeps coming on stronger—that has been the story of the first half of the Bathurst 12 Hours.

After a blazing first two hours, when Allan Simonsen in the Maranello Racing Ferrari 458 set six fastest-lap records, the next four hours was a mix of rain, light rain, heavy rain and more rain, with impending heavy rain and fog in the forecast.

The rain changed the complexion of the race entirely. The Ferraris were set up for a dry race on a hot day—they severely lacked grip, and their performance showed it. One Mercedes crashed in the rain; the other, the #20 Erebus Racing SLS AMG, worked amazingly in the light rain in the hands of Jeroen Bleekemolen and later Peter Hackett, but when the rain slacked off or got much heavier, the Mercs couldn’t match the pace of the cars which basically took over the race: the Phoenix Racing Audi R8 LMSs.

The #1 Audi, with Christopher Mies, Christer Joens, and Darryl O’Young, started from the pole, lost the lead after three laps, and got it back after the Maranello Ferrari succumbed to electrical problems and the Erebus Mercedes couldn’t quite manage the grip levels of the R8s.

After its amazing first stint, the Maranello Ferrari had nothing but bad luck. Its ECU shut the engine down while the car was leading the race, then again after a pit stop; the traction control failed (in the rain,) then the car shut off again on lap 114. Driver Dominik Farnbacher tried to reset the ECU, but the inside fire extinguisher fired, filling the car with foam.

There were no cautions in the first two hours; the field ran a record pace. Once the clouds broke, another half-dozen caution periods ensued. Several cars spun or slid into the barriers, including the #23 JBS Lamborghini, and the #21 Black Falcon Mercedes, leaving only three cars on the lead lap.

The final caution period of the first half of the race was called on lap 126 when the #68 Motorsports Services BMW nosed into the wall. During this caution, Mark Eddy took over from Warren Luff in the leading #2 Audi. Eddy was starting his first stint of the race, in the wet, halfway through the race, facing drivers who were fully accustomed to the conditions, and it was not an auspicious debut.

After the restart, five hours, fifty-five minutes into the race, Jeroen Bleekemolen in the #20 Mercedes out-braked Mark Eddy in the #2 Audi, taking the lead of the race.

Christopher Mies in the #1 Audi squeezed past his teammate and took off after Bleekemolen. Mies made short work of the Mercedes driver, trying him on the inside before passing on the outside under braking. On the next lap, Eddy spun off but managed to get back on track without losing much time.

Eddy got back going, and Mies motored on as he had all race, making it look as if driving in the abominable conditions was easy—until, fifteen minutes after the six-hour mark, he too made an error, spinning into the sand and getting stuck.

During this seventh safety car period, Mark Eddy pitted to top off the fuel. Someone made a communications error, and Eddy tried to drive off with the fuel hose still attached. Luckily safety crews doused the pits before a fire started, but not only did the #2 Audi spill a lot of fuel, it also ripped apart its fuel rig. If the crew cannot fix it to the satisfaction of the safety officials, the #2 Audi might not be allowed to refuel.

With the race back to green and 145 laps gone, Mark Eddy was back in the lead and turning fast laps after a Mercedes pit stop. Darryl O’Young in the #1 Audi passed Bret Curtis in the #20 for second on lap 143. It would almost seem that Audi had recovered from its errors and was back on track to dominate the race.

However, race officials were reviewing tapes of the Audi incident, questioning both whether Mark Eddy might deserve a penalty for driving off with the fuel hose inserted, and whether the #1 Audi should have been allowed into the pits while the safety crew was cleaning up the spilled fuel.

Even if both Audis are assessed penalties, they have enough time to make up lost time. So long as the rain holds, the Audis are the fastest cars on the track.

Halfway through a 12-hour race is not the time to make predictions. Engines and suspensions can break at any time; a stray puddle or a lump of rubber, a driver who loses control in front of one of the leaders, not to mention the steadily (if slowly) worsening weather—The Audis look to have the race in the bag but only a brave gambler would lay a bet this early in the race.

Editor’s Note: 6:45 into the race, Mark Eddy lost control at the entry to the pits and dug himself deep into the sand trap, losing a lap and the race lead. Once he made it back to the pit, the #2 Audi was assessed a five-minute penalty for unsafe pit operation. This kind of thing is why people don’t bet on auto racing.

Seven Hour Update: The fog at the top of Mt. Panorama is so thick, it seems possible the organizers might have to red-flag the race, or at least call out the safety car until the fog lifts.

Mark Eddy lost control coming over the mountaintop and stuffed the #2 Audi into the Armco, finishing the day for the race-leading Audi. The #33 Clearwater Racing Ferrari took third behind the #20 Mercedes.