A Preview of Spring in the City of Saint Francis
0 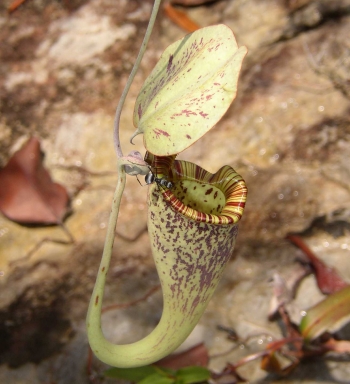 Bat Roosts in Pitcher Plant, Feeding It With Excrement

Scientists have discovered what appears to be the second known mutualistic relationship between a carnivorous plant and a mammal, according to a study published online in Biology Letters on Jan. 26.

In the lowland rainforests of Borneo, Hardwicke’s woolly bat (Kerivoula hardwickii hardwickii) roosts in the traps of the carnivorous pitcher plant (Nepenthes rafflesiana elongata), and the plant benefits from the nitrogen-rich urine and droppings of the bats.

When scientists first observed the tiny bats roosting inside the pitchers in 2008, they hypothesized that there might be a symbiosis between the two species, with both benefitting from the association—the bat gets shelter and the plant gets food.

But mutualistic relationships between plants and vertebrates are rare, except for arrangements to disperse seeds and pollen. However, the study revealed a likely symbiotic resource-service relationship between bat and plant, and interestingly the animal supplies the food to the plant, not vice versa. In fact, it seems the bat may be more dependent than the plant.

“There’s a lot of animal-plant mutualisms, but this one is where the animal gives a nutrient to a plant. Usually it’s the other way around,” he said.

“The pitcher is a very nice roost for them,” Grafe said. “It’s dry in there and there’s no buildup of blood-sucking ectoparasites that often accumulate in other cavities.”

During the study, the researchers radio-tracked 17 woolly bats and found that they exclusively used these plant pitchers during the day, although other roost sites like tree hollows and different pitcher plant species were available.

The scientists also noted that the aerial pitchers of this particular plant only produce small amounts of insect-attracting chemicals and digestive fluid, and do not attract insects well, compared with other carnivorous plant species. And unlike other Nepenthes species, the elongated pitchers of Nepenthes rafflesiana elongata can be comfortably occupied by two bats stacked above the fluid.

Out of 223 plants studied, 64 housed at least one bat in one of its pitchers during the 6.5-week study period. When the scientists compared the nitrogen content of leaves in plants that sheltered bats to plants without bats, they found it was significantly higher, estimating that, on average, woolly bat feces gives the plant an extra 33.8 percent of leaf nitrogen content.

“The pitcher plant benefits from attracting the bat because the bats defecate into the pitcher, using it as a toilet if you will,” Grafe told the BBC.

A similar study published in 2009 suggested that several species of pitcher plants in Borneo benefit from tree shrew droppings in high-altitude rainforests, perhaps because insect prey is scarce in these habitats.

However, this new study shows that feces-trapping is also happening in pitcher plants in lowland forests, and therefore insect prey availability is not necessarily a limiting factor.

The scientists concluded that the plants do not rely on a single nitrogen acquisition strategy because the probability of attracting a bat to a particular pitcher was only 22.8 percent in this study. This dual strategy allows for “conditional asymmetries” in the interaction between the two species. So if bats are not present in some areas where the pitcher plant species grows, the plant can still survive.