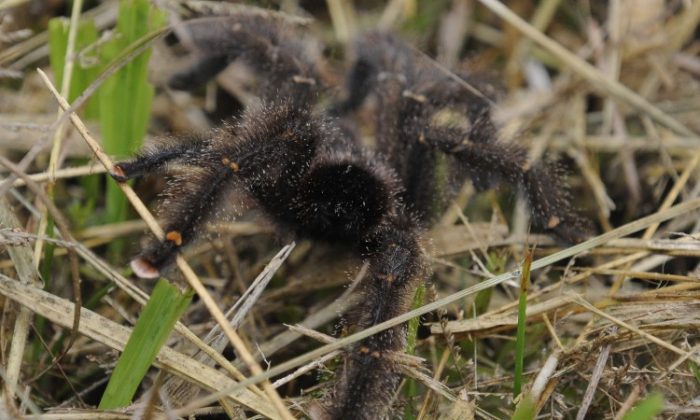 A tarantula makes its way through the grass of the Yasuni National Park, in the Ecuadorean Amazon forest, on Aug. 21, 2010. Tarantulas in Ecuador and Peru have been known to eat bats, according to reports gathered by biologists in a study published March 13, 2013. (Rodrido Buendia/AFP/Getty Images)
Science

Bat-eating Spiders All Over the World, Except Antarctica

Bat-eating spiders are more common than previously known by biologists, according to a study published March 13.

Bat-eating spiders are more widespread than previously assumed, according to a study titled “Bat Predation by Spiders,” published March 13 by biologist Martin Nyffeler of the University of Basel in Switzerland, and ecologist Mirjam Knörnschild of the University of Ulm in Germany.

While 90 percent of the cases occurred in tropical climates, a fishing spider in Indiana was seen trying to kill a bat pup. The attempt likely failed because the observers disrupted the kill.

The most prevalent bat-killers are orb-weaving spiders called Nephilas found in the southeast United States through to Argentina and Peru. They dwell in forests and reach a leg span of 10–15 centimeters (4–6 inches) and a weight of 1–7 grams (0.04–0.25 ounces).

The bats caught in webs were usually on the small side, with a wingspan of 10–24 centimeters (4–9.4 inches) and an adult weight of 3–8 grams (0.1–0.28 ounces). They usually belonged to the most common bat species in their respective areas.

“While in some instances bats entangled in spider webs may have died of exhaustion, starvation, dehydration, and/or hyperthermia (i.e., non-predation death), there were numerous other instances where spiders were seen actively attacking, killing, and eating the captured bats (i.e., predation),” states the report. “This evidence suggests that spider predation on flying vertebrates is more widespread than previously assumed.”