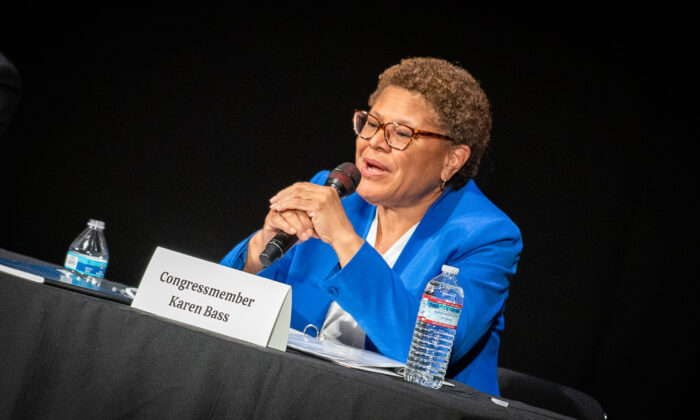 LOS ANGELES—Rep. Karen Bass, the leading contender in the race for mayor of Los Angeles, is one of two influential politicians who received full-tuition scholarships valued at nearly $100,000 from the University of Southern California’s (USC) social work program, the Los Angeles Times is reporting Sept. 8.

The other politician who received a scholarship from the university is the son of former Los Angeles County Supervisor and City Councilman Mark Ridley-Thomas, who has been indicted on bribery and fraud charges.

Federal prosecutors have not indicated Bass is under criminal investigation. However, prosecutors have declared that Bass’s scholarship and her dealings with USC are “critical” to their bribery case and to their broader portrayal of corruption in the university’s social work program, the Los Angeles Times reported.

Marilyn Flynn, the former dean of the University of Southern California’s social work program, was also indicted in the case with Ridley-Thomas.

The prosecutors’ filing states that by awarding Bass free tuition in 2011, Flynn hoped to obtain the congresswoman’s assistance in passing legislation. Bass sponsored a bill in Congress that would have expanded USC’s and other private universities’ access to federal funding for social work, “just as defendant Flynn wanted.”

Flynn is charged with what prosecutors allege was a quid pro quo with Ridley-Thomas involving an exchange of lucrative county contracts for a scholarship awarded to his son. Prosecutors have pointed to an email from Flynn in which she noted doing “the same” exchange with Bass, the Los Angeles Times reported.

In many of the court filings, Bass’s name is redacted, in accord with Department of Justice policy. But the newspaper confirmed her identity through case records, people familiar with the case, and copies of emails that were filed in court and later redacted.

Flynn and Ridley-Thomas will be on trial in November. The details of Bass’s free master’s degree from the school could become a contested part of the case, the newspaper reported. According to a copy of a subpoena filed in August, Flynn’s lawyers subpoenaed USC in June for correspondence pertaining to Bass’s scholarship and any honors or benefits given to Bass.

Bass is heading into the final weeks of her campaign for mayor of Los Angeles with Rick Caruso.

Bass, through a spokesperson, denied speaking with Flynn about federal funding for social work programs at private universities. When asked whether it was apparent that Flynn had a legislative agenda in offering the scholarship, Bass said, “No,” according to the newspaper.

“Everybody knows that the welfare of children and families has been a passion and policy focus of mine for decades,” Bass told the newspaper. “The only reason I studied nights and weekends for a master’s degree was to become a better advocate for children and families—period.”