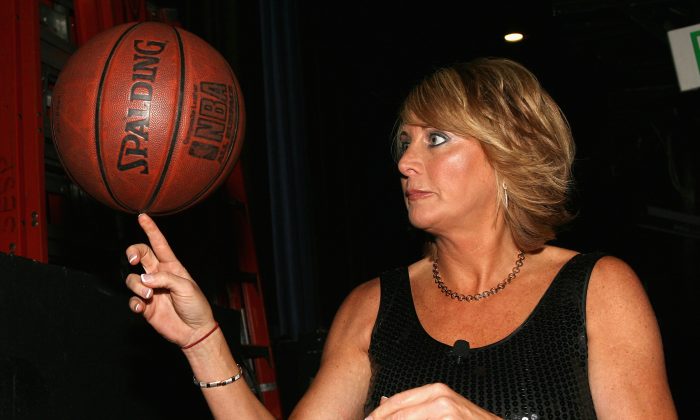 Basketball player Nancy Lieberman spins a ball on her finger backstage at The Billies presented by The Women's Sports Foundation at the Beverly Hilton Hotel on April 11, 2007 in Beverly Hills, California. (Photo by Frazer Harrison/Getty Images for The Billies)
12- OBSOLETE

The recent good news that Nancy Lieberman was hired by the Sacramento Kings as the National Basketball Association’s second female assistant coach, joining Becky Hammon of the San Antonio Spurs, was long overdue.

Long ago and far away I spent a great deal of time with Nancy Lieberman, interviewing her, socializing with her, gathering all the material for BASKETBALL MY WAY, a book about her life and times and basketball insights.

The hardcover work was published in 1982 by Scribners. Since then, much has happened to Nancy and to me.

Dubbed “Lady Magic,” by her adoring fans, Nancy was big in Far Rockaway where she hailed from, in the Five Towns of Long Island, where I lived, and all over the place.

And why not? She already had a superstar resume and a flair. She played for Team USA in Montreal at the 1976 Summer Games, the first year the Olympics included women’s basketball. At Old Dominion University, she set records and pushed the Lady Monarchs to two back- to-back national titles. Nancy was a three time All-American, two-time winner of the Wade Trophy as the top women’s player.

Working with her on BASKETBALL MY WAY gave me some prestige in the neighborhood. It was also a pleasure and a kind of family affair. My mother-in-law of blessed memory became enamored with Nancy, made her little delicious treats to keep her energy up as we spent long hours interviewing for the book in progress. My wife Myrna also got into the act and earned her credit as co-author. I spent time with Nancy’s mom who was so proud of what her talented daughter had accomplished.

BASKETBALL MY WAY, a hardcover book priced at $12.95, began in Nancy’s voice: “I was born on the first day of July in 1958. Contrary to some stories you may have heard, I wasn’t born with a basketball in my hand, and I didn’t take my first few steps while dribbling a ball.”

Since Nancy’s time, I have written other sports celebrities books with Red Holzman, Nolan Ryan, Tony Dorsett, Don Strock. But that first one back in a simpler time for me and for Nancy, still stays with me and has a kind of poignancy for the purity of the experience.

I still have my signed copy of the book from “Lady Magic.” The inscription reads: “Harvey, I look forward to working on another book with you. Thanks for everything. Love, Nancy”