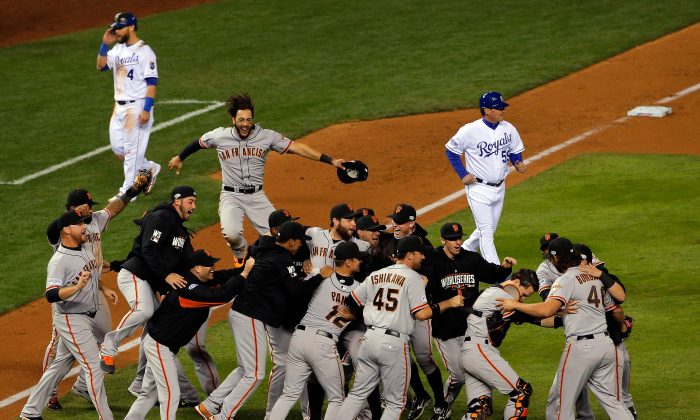 The San Francisco Giants won their third World Series title in five years in 2014, despite not having homefield advantage in the NLDS, NLCS, or World Series. (Doug Pensinger/Getty Images)
Baseball

As of Sunday, only two division titles were wrapped up—by the Mets and Royals—and in both instances the teams rested their regular players despite not having secured a home-field advantage through the playoffs.

Why? The home-field advantage—while still an advantage in baseball—traditionally isn’t as pronounced in the major leagues as it is in other sports.

It’s another in a line of odd things about baseball that we’ve grown accustomed to.

Last year’s Fall Classic was played between wild card teams San Francisco and Kansas City—both of which advanced through the LDS and LCS without the benefit of a home-field advantage. Then in their World Series matchup, the Royals—by virtue of the AL winning the All-Star Game exhibition—had the home-field advantage so, of course, the Giants won in seven.

No one blinked an eye at this, of course. It’s baseball.

In all, six of the seven baseball postseason series last year—excluding the one-game wild card playoff games—were won by teams who were forced to play more games on the road than at home. Even more telling, the top seeds in each league—the Orioles and Nationals—won just a single game between them (1–6) before exiting.

To be fair, last year was an outlier in baseball. The previous October saw the top seeds in both leagues—Boston and St. Louis—meet in the World Series and the homefield-advantaged Red Sox won the title.

Still, that kind of extreme would never happen in professional basketball or football—sports where the top teams generally sport a regular season winning percentage between 75 and 95 percent. For perspective, a 100-win team in baseball (we haven’t had one since 2011) has a winning percentage of just 62 percent. In baseball, the better team doesn’t always win—home or away, playoffs or regular season.

The last time an NBA top seed was bounced in the first round was 2012 when the eighth-seeded Philadelphia Sixers—before they went into perpetual rebuilding mode—ousted a Derrick Rose-less Bulls team in six. Meanwhile, 13 of this year’s 15 playoff series were won by the team wearing the home white uniforms. Never have the top seeds lost in the opening round in the same season.

The NFL has a similar advantage. Eight of last year’s 10 playoff games were won by the home team and over the last four postseasons, the team with the homefield advantage has a 28–12 record.

Another reason for the difference is how the games are played.

In basketball, points are being piled up constantly—a good play almost always results in a small score. Not much luck is involved—save maybe the rare time a three-pointer is banked in—and consequently the team that plays better wins a majority of the time. Football isn’t quite the same as generally it takes several good plays to score, yet reaching the end zone results in more points relative to basketball. Luck plays a lesser role though—there are few accidental scores in football.

In baseball, the best hitters are those who fail 70 percent of the time. Luck plays a much bigger role in the game.

A well-hit ball can easily go right to a defender and result in an out—or even a double-play if it’s a line drive with runners on base. Meanwhile a poorly-hit blooper can find the weak spot in the defense and result in an RBI single. Infield hits—a.k.a. “swinging bunts”—are more trouble for the defense than a hard hit ground ball, despite how fooled the batter might be by the pitch. And since runs are hard to come by—especially in the post-steroid era—these kinds of lucky hits can often determine the winner.

Crowd effect is also more pronounced in other sports than in baseball.

In the NFL, the offense has to be able to hear the quarterback at the line of scrimmage. Most crowds come alive when the home team is on defense—the so-called 12th man. The result is a sometime out-of-sorts offense that has trouble communicating and a defense that’s jacked up while feeding off the noise.

Basketball has a proximity home-court advantage. The fans are so close to the action that the intimidation factor is much greater. While baseball fans are usually too far away from the fielders to make a difference, they’re right on top of the action in basketball and can even talk to players on the court—just ask Spike Lee and Reggie Miller.

In baseball, pitchers and catchers rely on hand signals in the first place, so noise doesn’t really impact communication. In this sport, home-field advantage is more in the makeup of the team.

Since there are no set rules for exactly how far the home run fences are, how much foul territory there should be, or even how high the fences are—stadium dimensions that are uniform in nearly every other sport—organizations mold their teams to fit their ballpark.

Even the setup of how the game is played slightly favors left-handers over right-handers. A left-handed hitter actually has a shorter running path to first base because of how the batter’s boxes are set up, while a left-handed pitcher will have an advantage in seeing and thus picking off a runner at first base (remember Andy Pettitte?) because of how he’s situated on the mound.

Even more so, baseball is played somewhat differently in the postseason. Five-man rotations are thrown out the window, thanks to all the off-days, and sometimes even the fourth starter is skipped. Thus a weak back end of the rotation in the regular season is nullified when it matters most.

Of course, a better pitcher might induce more bloopers and swinging bunts than well-hit balls—resulting in a lucky run or two—so maybe a more tailored rotation doesn’t make such a difference after all. It’s just another oddity about baseball that we’ve grown accustomed to.