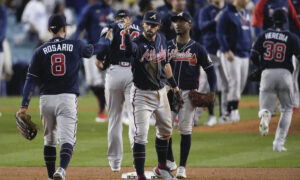 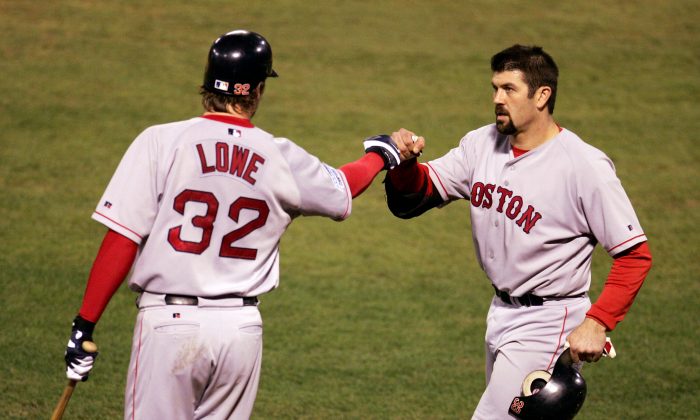 Jason Varitek (R) of the Boston Red Sox is congratulated by teammate Derek Lowe after scoring against the St. Louis Cardinals during the third inning of Game 4 of the World Series on Oct. 27, 2004 at Busch Stadium in St. Louis. Varitek and Lowe were acquired by Boston at the trade deadline in 1997 for Heathcliff Slocum in a deal Seattle surely wishes it could have back. (Al Bello/Getty Images)
Baseball

Every year at baseball’s trade deadline (July 31) a number of teams in contention (or teams that think they’re in contention) take a risk on improving their present standings by mortgaging an uncertain future. Teams looking to win it all take calculated risks on short-term rental players for a prospect or a collection of prospects and hope it works out—both for now and in the future.

It’s a dicey situation due to a number of factors including the well-known fact that baseball prospects are the toughest to project. That’s part of the reason why baseball’s draft is 50 rounds long and teams are excited just to have their first round picks make it to the big leagues—let alone be All-Stars.

Naturally this risky, yet accepted, trading method has yielded a number of uneven deals. Here are the five most lopsided deadline trades since 1990:

Though this trade hasn’t given all these prospects the time to declare a winner in the deal, the sheer volume of undesirable contracts the Dodgers took on does. Between Crawford, Beckett, and Gonzalez, Los Angeles assumed some $200 million worth of liabilities that netted them an 86–76 season last year—two games out of the wild card.

This year Beckett has a 5.19 ERA, Crawford is hitting a decent (though not for his salary) .284, and Gonzalez, clearlt the desired star of the deal for Los Angeles, has 15 home runs, 65 RBIs, and a .299 average. Had the Dodgers not found Yasiel Puig, who has saved this season, this deal would look even worse.

Boston, which suffered through an awful 69–93 season in 2012, was essentially able to hit the reset button and retool with plenty of cash in hand. Currently they are 64–44 and just a half-game out of first place.

Hard to envision what the Mets (just 49–53 at the time) were thinking with this one. Zambrano, then 28, was a mediocre 35–27 with a 4.47 ERA in four seasons as a starter for Tampa Bay while Furtunato, then 29, was an older rookie reliever.

While Zambrano went a pedestrian 10–14 with a 4.42 ERA in parts of three seasons in New York, Kazmir (then just 20) was almost immediately thrust into Tampa Bay’s rotation (debut was Aug. 23) and proved to be quite a catch. The left-hander went 55–44 with a 3.92 ERA in parts of seven seasons and was a big part of the team that turned the franchise around, when they made the World Series in 2008.

Furtunato, meanwhile, pitched in 15 relief appearances in 2004, missed all of 2005 with an injury, and was done after two appearances the following season. Kazmir, now 29, is 6–4 with a 4.11 ERA as a starter for Cleveland this season.

This was more of an unusual lopsided trade deadline deal as Ramirez was just 25 and had a number of good years ahead of him as the Cubs third baseman. Even as late as last season, Ramirez hit .300 with 27 home runs, 50 doubles, and drove in 105 runs.

Lofton, then 36, hit .327 and stole 20 bases in 56 games as a nice top-of-the-lineup rental for the Cubs in 2003. Lofton and Ramirez helped lead Chicago to the playoffs before falling to Florida in seven games in the NLCS in what is remembered as the Steve Bartman series.

The Pirates, which did the deal as a salary dump and were never in the pennant race, got little help from any of the players in the deal. It’s just another reason why it’s taken them until now to become a contender again.

Anderson, 37 at the time, posted a 1.23 ERA in 22 innings for the first-place Red Sox, which was summarily swept in the postseason by Oakland, featuring the Bash brothers. He then signed with San Diego in the offseason and that was it.

For those insignificant 15 appearances, Boston gave up one of the greatest power-hitting first baseman of all-time in Bagwell, who would have made an awesome 1-2 punch with Mo Vaughn in the Red Sox lineup for most of the ’90s. All in all, “Bags” hit 449 home runs, won the 1994 MVP, and had eight seasons of 30-plus home runs and 100-plus RBIs. The probable future Hall-of-Famer even won a Gold Glove Award.

Seattle went on to make the playoffs in 1997 so they can be happy for that. But the then 31-year-old Slocum, who lasted just a year and a half with the Mariners (going 2–9 with a 4.97 ERA) was not much help. Even if they had traded just one of these prospects the trade would have been be lopsided.

Varitek would be Boston’s catcher for the next 14 seasons, earning three All-Star selections and eventually becoming team captain. Meanwhile Derek Lowe would earn 42 saves as the team’s closer in 2000 before becoming a 21-game winner as a starter in 2002. Both were integral parts of the Red Sox 2004 World Series-winning team, while Varitek was also part of the 2007 championship squad.

There’s not much redeemable about this deal for the Expos. They were just 51–53 at the time of the deal and finished 83–79—19 games behind the first-place Braves and 12 out of the wild card. To make matters worse, Montreal then flipped Colon to the White Sox that offseason, along with Jorge Nunez, for a washed-up Orlando Hernandez and unknowns Rocky Biddle and Jeff Liefer. Yikes.