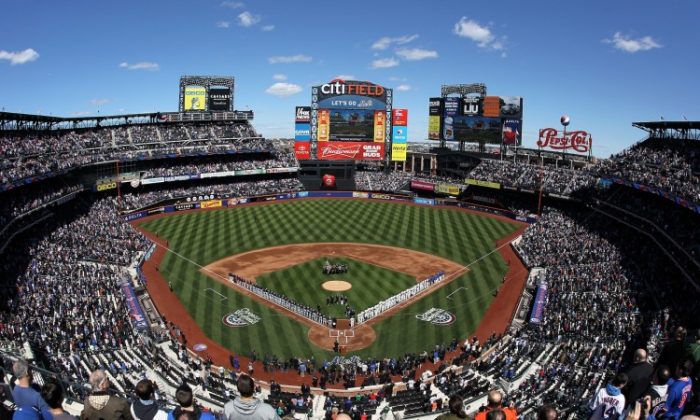 Mets fans Rich Fitzgerald with his son Ethan and friend Luca Columbano, wait in line to see the Mets on opening day at Citi Fields. Rich said that he has been going to opening day for around 20 years. (Benjamin Chasteen/The Epoch Times)
Baseball

NEW YORK—The excitement was palpable as long lines of fans, young and old, streamed into Citi Field stadium under cloudless blue skies on Thursday for the beginning of the 2012 New York baseball season.

Johan Santana hurled the first pitch as the Mets treated the near-capacity crowd of 42,080 to a 1-0 opening day victory over the Atlanta Braves.

The start of the season heralds a clean slate and new hope for Mets fans.

“The one thing we always have is hope because, at least today, we are all tied for first place,” said lifelong Mets fan Assemblyman Francisco P. Moya on Thursday. The assemblyman, who grew up in the shadows of Shea Stadium in Corona, donned orange and blue to support his favorite team.

Moya did not attend the game, but visited with friends who were tailgating in the parking lot.

“I don’t think there is any better place to celebrate opening day,” he said.

Mets fan Bryan Lang, who has been attending opening day for around 20 years, was at Citi Field on Thursday and shared why opening day was so special for him.

“I am passing on my family history. When I was growing up my father took me to the opening of the Dodgers games. When they left we became Mets fans and now I am passing down the history to my children,” Lang said.

While the city’s fans may be divided between the Yankees and Mets, the sentiment of family resonated between both fan bases on opening day.

“The Mighty Casey,” founder of Bleeding Yankee Blue.com said via email, “It’s about bringing my kids to the Yankee Stadium; me trying to watch a game and them, eating their way through the ballpark. It’s comical actually, but it’s all about family for me.”

The Yankees will start their 2012 campaign on Friday in Tampa where they face the Rays.