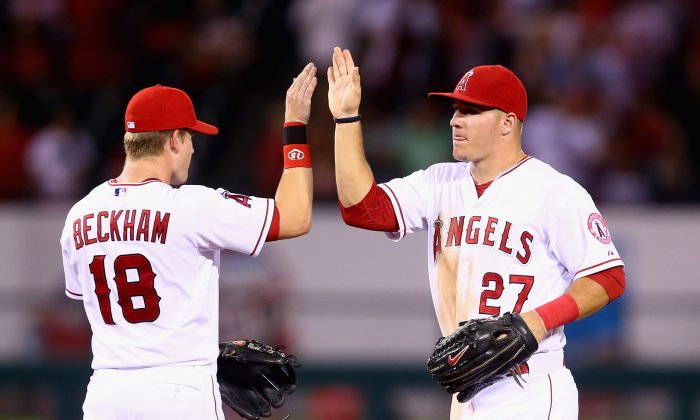 Gordon Beckham (L) and MVP candidate Mike Trout of the Los Angeles Angels, in this Aug 27, 2014 photo, have the Angels in the driver's seat in the American League. (Jeff Gross/Getty Images)
News

On the Ball: MLB Power Rankings

With a month to go in the season, both central divisions are far from being decided.

In the AL Central, the Royals have taken the lead from the Tigers for the time being, but have a ways to go before clinching their first playoff appearance in 29 years.

Meanwhile Milwaukee, which has led the NL Central almost from the get-go, has watched it all disappear as part of an eight-game losing streak. Here are the best 10 teams in the majors:

10. St. Louis Cardinals (77–63): The Cardinals are suddenly hot—six straight wins and counting—and consequently have turned a 1.5-game deficit into a 4-game lead over Milwaukee. St. Louis has averaged 6.2 runs per game during the streak.

8. Kansas City Royals (77–61): The surprising Royals have the division lead thanks to good starting pitching, a great bullpen, excellent defense, and the occasional hitting. Right now three-time Gold Glove winner Alex Gordon is doing the fielding as well as the hitting—10 home runs in 115 at-bats since Aug. 1, as compared to 9 in his previous 373.

6. Seattle Mariners (76–63): Seattle ace Felix Hernandez seems well on his way to his second Cy Young. The 28-year-old is second in wins with 14, second in ERA at 2.18, fourth in strikeouts with 209, while sporting a league-best 0.898 walks/hits per inning pitched.

5. Oakland A’s (79–60): Normally contenders deal prospects to add veterans at the trade deadline (instead of veterans-for-veterans) and this year’s A’s are a prime example why. Ever since the already pitching-heavy A’s dealt slugger Yoenis Cespedes for ace Jon Lester, Oakland is just 13–19 and had to trade for Chicago slugger Adam Dunn to beef up their lineup again.

3. Washington Nationals (79–59): Though the Dodgers have more stars and the Giants have a pair of recent World Series titles to boast (2010 & ’12), the Nationals look like the best team in the NL. Washington has the highest run differential in the NL (+108) as well as the best team ERA (3.13). If Bryce Harper stays hot (.288 average, 8 home runs since Aug. 1) they should be the team to beat come October.

2. Baltimore Orioles (82–57): After carrying Baltimore through the first half, Nelson Cruz (28 homers through the first 93 games) has gone cold. The slugger has hit just .200 with 9 home runs since the break, though the balanced-Orioles have actually increased their AL East lead from 4 to 9.5 games since then.

1. Los Angeles Angels (84–55): The Angels, after having missed the playoffs each of the last four years, have made their 2014 turnaround through pitching. The team has an ERA of 3.52 this season (fourth-best in the AL), as compared to 4.23 last year. Unfortunately for them, top starter Garrett Richards (13–4 record, 2.61 ERA) is out for the season with a torn patellar tendon. Their World Series hopes may be pinned on how struggling starter C.J. Wilson (10–9 record, 4.66 ERA) fares down the stretch.