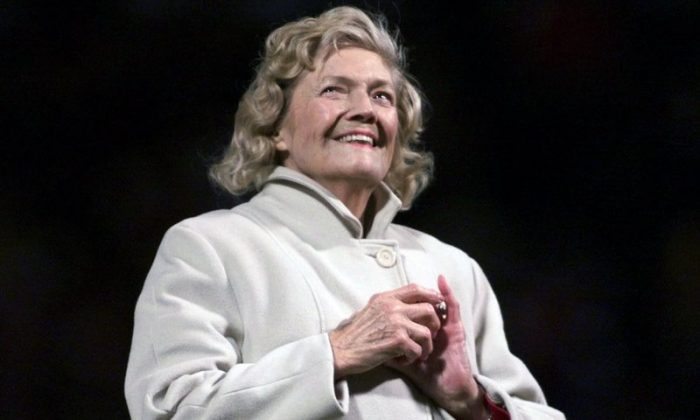 Julia Ruth Stevens, daughter of baseball legend Babe Ruth, prepared to throw the ceremonial first pitch at the start of Game 5 at the American League Championship Series at Fenway Park in Boston, Mass., on Oct. 18, 1999. (AP Photo/Elise Amendola/File)
US News

Babe Ruth’s last surviving daughter has passed away in Henderson, Nevada, on March 9.

Julia’s son, Tom Stevens, confirmed that her remains will be cremated in line with her wishes and be buried at a soon-to-be announced date this spring near where she used to live in Conway, New Hampshire.

“She lived such a full, interesting life,” he told the Associated Press. “She was an ambassador for Babe Ruth.”

Long Ball City wishes to express its sympathy to the family of Julia Ruth Stevens, the last surviving child of baseball icon Babe Ruth, who died Saturday at the age of 102. pic.twitter.com/kNG4QCB0up

Tonight, just after receiving the Seymour Medal from SABR for The Big Fella, I learned of the death of Julia Ruth Stevens, Babe’s 102-year-old daughter. This was taken at her 100th birthday in NH. Sweet dreams, Julia. pic.twitter.com/3bnP2SjRps

Julia relocated from Florida to Arizona after a category five hurricane, Andrew, hit the Bahamas, Florida, and Louisiana back in 1992. She later moved to Nevada where he lived the rest of her live.

Diane Murphy, a fellow resident at Prestige Senior Living at Mira Loma, remembers Julia as a bright and vibrant person even though she had lost her eyesight. She recalls that Julia would often join in meeting a circle of residents to read books out loud.

“She was so sharp and laughed at the right moments,” Diane said. “She was a lovely lady.”

Even well into her 90s, Julia was invited to throw the first pitch at baseball games across the nation. She appeared at the annual Babe Ruth Little League World Series and attended Hall of Fame induction ceremonies in Cooperstown, New York.

“As long as there is baseball, Daddy’s name is always going to be mentioned. He was one of a kind,” she previously said. “My goal in life is to keep his name alive. He was a wonderful father and I remember him as that and just not as a baseball player.”

“He was a marvelous dancer…had perfect timing…and he taught me how to dance…and I loved dancing with Daddy.” ~ Julia Ruth Stevens reminiscing about her baseball legend father Babe Ruth. #MLB #History pic.twitter.com/w8JQwhWHYj

RIP Julia Ruth Stevens, last surviving child of Babe Ruth, 102. She born in 1916 while her father was with the #RedSox. Once asked about “the Curse,” she said “Daddy loved baseball. He’d never put a curse on a baseball team” – https://t.co/6zIGWimVq2 #MLB pic.twitter.com/5ZfK6Ik6v5

Julia was not Babe Ruth’s biological daughter and was adopted at the age of 12 when baseball’s biggest star married her mother, Claire Hodgson, in 1929. Hodgson died in 1976.

Julia is the eldest of two daughters adopted by Ruth. Dorothy Ruth Pirone was Ruth’s daughter from a previous relationship and died aged 67 in the year 1989.

Tom told the Las Vegas Review-Journal in an interview earlier this year that it bothered him when people called his mother Babe Ruth’s stepdaughter.

He said Ruth was matched as a suitable blood donor to provide a blood transfusion to Julia when she was hospitalized as a young adult.

“She said as far as she was concerned, between being adopted and the transfusion, ‘I’m his daughter, period,’” Tom recalled.

“I sometimes wonder if the designated hitter rule would have been in effect when Daddy played, his career would’ve lasted much longer and he would’ve hit a lot more home runs,” Julia previously said. “It was his legs that gave out. He had trouble with his knees.”

Julia revealed that her father taught her how to dance and bowl, and proclaimed she “couldn’t have had a better father than him.”

She made her final trip to Yankee Stadium aged 91 back in 2008 to farewell one of Ruth’s favorite places where he hit many of his 714 career home runs.

Accompanied by her son and two grandchildren, Julia received a warm reception from fans at a game where New York lost to Cincinnati, 6-0.

A New York sportswriter once famously dubbed the Bronx stadium “The House That Ruth Built,” and the Yankees retired Ruth’s No. 3 during the great slugger’s final visit to the ballpark and 25th anniversary celebration of Yankee Stadium on June 13, 1948.

Julia’s family released a statement, saying she had “many amazing experiences, which she was pleased to share with eager reporters and fans alike. Until the very end, she was very proud to call him ‘Daddy’ and she particularly loved recalling events from 1934 when she went on a ‘round the world’ tour with her parents” to Japan with a major-league all-star team.”