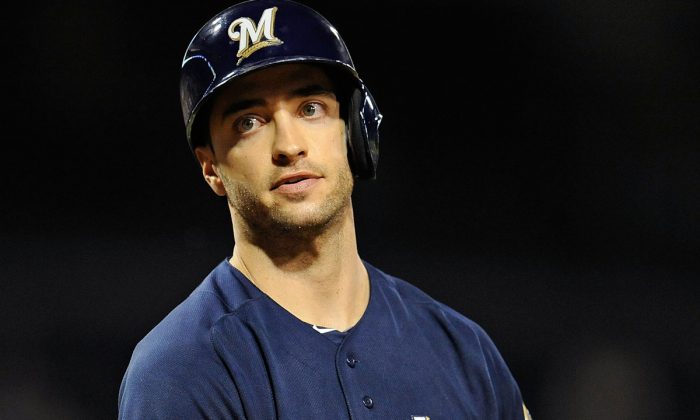 Ryan Braun #8 of the Milwaukee Brewers bats against the Pittsburgh Pirates at PNC Park in Pittsburgh, Penn., on May 15, 2013. (Joe Sargent/Getty Images)
Baseball

Tony Bosch, founder of Biogenesis of America, is expected to provide Major League Baseball (MLB) with evidence against players he allegedly provided with performance-enhancing drugs.

About 20 players could face suspension, inluding Ryan Braun of the Milwaukee Brewers and Alex Rodriguez of the New York Yankees. Braun’s name appeared on hand-written records at the now-shuttered Biogenesis, according to ESPN.

Bosch told ESPN in April that Braun’s legal team had consulted him after Braun faced suspension for steriod-use in 2011. He said this is why Braun’s name was in his records. Braun successfully appealed his suspension in 2011 and denies using performance-enhancing drugs (PEDs).

“If I’ve ever made any mistakes in my life, I’ve taken responsibility for my actions. I truly believe in my heart, and I would bet my life that this substance never entered my body at any point,” he told ESPN in February 2012. He told ESPN on Wednesday, “I will not make any further statements about it, the truth has not changed.”

Other players who allegedly may face suspension, according to ESPN, include Melky Cabrera of the Toronto Blue Jays, Francisco Cervelli of the New York Yankees, and Nelson Cruz of the Texas Rangers.

A first-time offense carries a penalty of a 50-week suspension.

Time magazine sports blogger Sean Gregory doesn’t think, however, that the scandal will hurt the game: “Baseball doping scandals don’t spark collective outrage anymore, or cause fans to flee the game. In instances like these, baseball benefits from its marketing strategy: game first, stars second.”