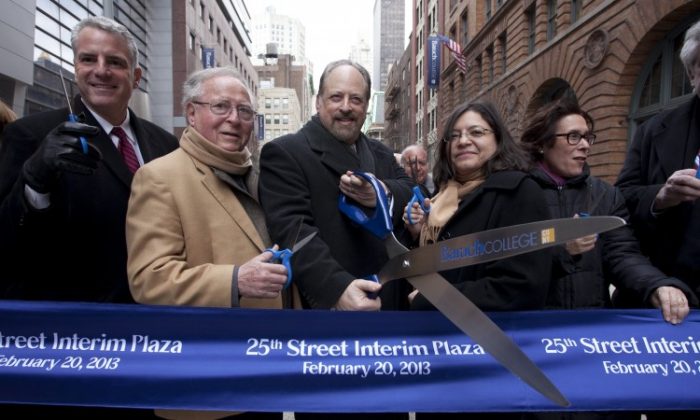 A student braves the cold to enjoy the new pedestrian plaza on Baruch College campus on Feb. 20. (Samira Bouaou/The Epoch Times)
US

The street is now lined with crunchy gravel and filled with outdoor seating in “Baruch-blue.” The ribbon cutting took place on February 20 accompanied by Baruch alumni and university and city officials including Chancellor Matthew Goldstein and Councilwoman Rosie Mendez.

“The students have been ecstatic about this,” said Student Government President Chris Catalano. “It was done so fast, it really surprised a lot of students, especially the seniors and juniors, [who] assumed it would never happen.”

The idea for the plaza has been circulated for years. Many, including Councilwoman Christine Quinn’s office, considered it to be impossible. In the end, it took collaboration between the school administrators, the student body, the community board, local businesses, alumni, and various city departments to finally push the project through. The new plaza is the first in the city to be financed via a public-private partnership.

“This is the best investment I have ever made out of all the money I have ever given,” said Lawrence N. Field, Baruch College alumnus, and CEO of NSB Associates.

The current plaza is an interim solution while the college seeks development proposals from architecture firms for a permanent installation that will be even grander.

Baruch foresees elevating the street to curb level, planting trees, adding a performance space and benches, and creating a green area at each end of the block to set the space apart from the rest of the concrete grid. The future plaza is financed by a “seven-figure” commitment from the Baruch College Fund, public and private funds, and the student government.

Baruch College President Mitchel B. Wallerstein said: “I’m just so thrilled that the city agreed to close the street. [It’s] both our students as well as the community that get the benefits of this.”