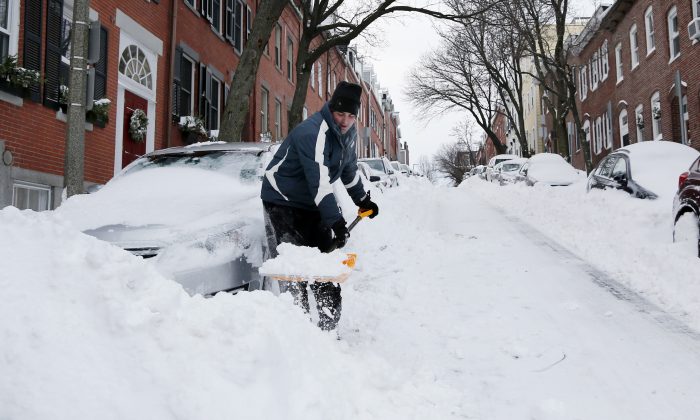 John Kenneally shovels his car out at his home in Boston's Charlestown section, Wednesday, Jan. 28, 2015, one day after a blizzard dumped about 2 feet of snow in the city. (AP Photo/Elise Amendola)
US

Chris Laudani, a local Boston bartender, was identified as being the “Boston Shoveler” who removed snow from the Boston Marathon finish line.

Photos of him went viral on Wednesday. He was seen shoveling the finish line amid whiteout conditions. Several feet of snow was dumped on Boston during this week’s winter storm.

“I only did it to send a message … I love the Boston Marathon and everything it stands for, the finish line doesn’t deserve to be covered in snow,” Laudani was quoted by ESPN as saying.

His employer, Back Bay Social Club in Boston, told local media outlets he was the “shoveler.”

Three people and hundreds more were injured during terrorist attacks in 2011 at the marathon’s finish line.

“I think it’s cool that so many people feel the same way, but I saw the word ‘hero’ being tossed around and that I don’t like,” he said. “I’m no hero, I’m just a nut who loves the marathon. The real heroes are the people who were out there clearing the streets and sidewalks, the [Boston Police Department], and the [Boston Fire Department] who risk their lives every day to keep people safe.”

The Boston Police Department also said it wanted to find who the “shoveler” was–to praise him.

“For someone to brave the blizzard to clear our finish line for us is yet another statement as to what our event means not only to runners but also to Americans,” said Tom Grilk, executive director of the BostonAthletic Association, which oversees the marathon.

The city bounced back quickly Wednesday from the Blizzard of 2015, with subways, buses and trains up and running again the morning after the storm buried a swath of New England in 2 to 3 feet of snow.

Many businesses reopened, as did Logan Airport, and homeowners, motorists and storekeepers dug out with grudging praise for the forecasters, who missed the mark in New York but got it right in New England.