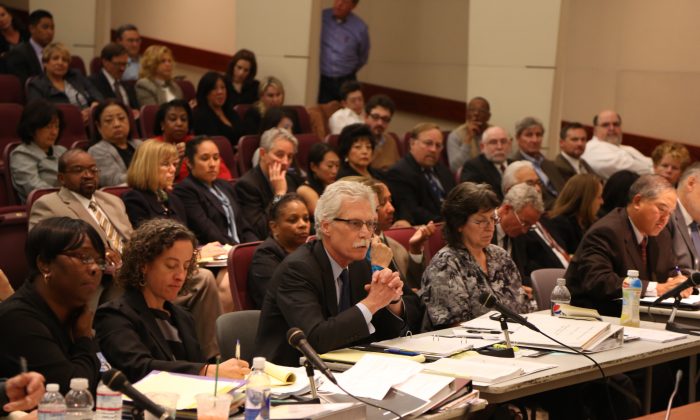 OAKLAND—A public hearing in front of Jerry Brown’s appointed panel to assess the state of the BART negotiations Wednesday revealed the wide gap that has yet to be bridged between BART and its unions before an agreement on a new contract can be reached.

“Unfortunately, we remain far apart on the major issues of this contract,” BART General Manager Grace Crunican testified. “That is why we are here today.”

BART Senior Attorney Vicki Nuetzel said the agency and the unions are $100 million apart in their contract proposals.

There’s the potential for a strike Monday if a cooling-off period is not declared and the two sides are unable to reach a deal by Sunday night.

“We bargain to get a fair contract that recognizes both the sacrifices of these workers and the cost of living in the Bay Area,” said Vin Harrington, an attorney for the Service Employees International Union, the other union in talks with BART. “We are not ashamed to be bargaining to defend a middle-class wage and benefit package. Nobody should be ashamed of that,” he said.

Crunican said BART needs to invest $500 million annually to maintain its aging system and prepare for future population growth in the Bay Area. This investment demands a “shared responsibility from all stakeholders” including a fiscally responsible contract for employees, she said.

The BART dispute resulted in a 4-1/2-day strike last month that snarled traffic on roadways and left commuters with long lines for buses and ferries. BART, the nation’s fifth-largest rail system, carries an estimated 400,000 riders daily.

Paul Oversier, assistant general manager, urged the governor to request a 60-day cooling-off period, saying a strike would hurt the economy and create serious threats to public health and safety.

“For those people who have no viable option other than BART, a strike represents nothing less than a temporary immobilization of their lives,” he said.

The unions stressed that the strike last month was not the outcome they preferred. “We did not want to disrupt the Bay Area. … We had no alternative,” Harrington said.

The unions insist that BART continues to be bargaining in bad faith, which makes any settlement impossible, and a strike unavoidable.

“The parties bargain to get to the middle, some middle ground. And that’s what we were trying to do. We need to bargain. And one of our substantial expenses here is that there isn’t anyone on the other side of the table to do that work,” Harrington said.

BART and its unions continue to squabble over wages, pensions, and employees’ health care contribution.

BART employees represented by ATU and the local Service Employees International Union average about $71,000 in base salary and $11,000 in overtime annually. They pay nothing toward their pensions and a $92-a-month flat fee for health insurance, according to BART.

BART said it has offered to raise salaries by 9 percent, up from 8 percent, over four years. It also scrapped its proposal to have employees pay a percentage of health care premium increases. Instead, employees could pay the $92 flat rate for the cheapest plan or pay more for higher cost plans, BART officials said.

Union officials countered that any proposed raise would be offset by takeaways in benefits. The unions are seeking a 15 percent raise over three years.

The panel was appointed by Brown on Sunday in hopes of preventing a strike that would have snarled the Monday morning commute.

The panel was given seven days to investigate the contract dispute and report its findings to the governor, who can then petition a court to call a 60-day cooling-off period in the negotiations. BART trains would continue to run during that period.

Both sides agreed to return to the bargaining table Thursday and Friday.

In the event of a strike, BART said, it would slightly expand its extra bus lines in serving a total of five BART stations, which would cover no more than 5,000 passengers.