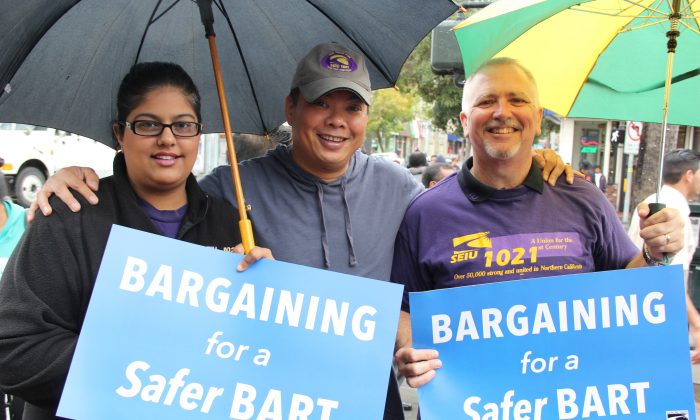 SAN FRANCISCO—Following a union vote authorizing a strike this week, Bay Area Rapid Transit management and workers are running out of time to negotiate a new contract and avert a standstill for one of the Bay’s most essential transportation systems.

Despite the vote, the Service Employees International Union Local 1021, and the Amalgamated Transit Union, representing some 2,300 members, said they’re committed to negotiating a new contract with BART and currently have no immediate plans to walk out after their contract expires late Sunday night.

“We’re not trying to strand the Bay Area,” said ATU Local President Antonette Bryant. “All we want is fair compensation and a safe workplace.”

BART’s last strike took place in 1997 and lasted six days. A new strike would affect about 400,000 commuters who use BART each weekday and would indirectly impact many other modes of transportation throughout the Bay Area.

In the event of BART coming to a halt, the Metropolitan Transportation Commission plans to help other transit providers adjust their services, especially buses and ferries.

However, there are limits. “Any such adjustments would replace only a small portion of BART’s passenger-carrying capacity,” states the Commission’s website.

The unions have asked for raises adding up to about 23.2 percent over three years. BART has offered one percent each year for the next four years.

Employees currently pay a flat $92 fee each month for health insurance, no matter the plan or how many people are covered.

BART management said they need to control costs to help pay for new rail cars and other improvements. The unions contended that BART has a $125 million operating surplus from increased ridership and high service-reliability rates, and that members deserve some of it.

“This procedural step is a clear signal our employees are willing to shut down the Bay Area and cause commute chaos to make their case for a 23 percent raise,” Rice said in a statement.

The opposing parties remain optimistic, however, that a deal can be reached, despite the unions’ filing a lawsuit Monday against BART, seeking an unfair-labor-practices declaration and claims that the transit agency is not bargaining in good faith.

“We are interested in reaching a reasonable solution with our union partners. We believe a deal can be reached in time to avert a strike, which will have far-reaching economic impacts to the region,” said Rice.

SEIU Local 1021, the union representing mechanics and maintenance workers, has stressed worker safety as a key issue in the negotiations.

Local 1021 has alleged that BART refuses to talk about improving safety standards for workers, including proper lighting at stations and on tracks. In 2001, a BART electrician was killed in a tunnel near the 24th St. Mission station prompting safety concerns.

“We cannot continue to work in these conditions and risk the lives of hardworking men and women who help keep BART running,” said Saul Almanza, vice president for Local 1021 BART Professional Chapter, Tuesday at a rally in the Mission District.

“While BART is getting unprecedented revenue, its workers are forced to do their job in the dark, without proper lighting and equipment,” said San Francisco Supervisor David Campos.

While the unions are not required to do so, they reiterated on Wednesday they would give the public a 72-hour notice before calling a strike

According to the Bay Area traffic service, 511, a strike can happen as early as Monday, July 1, the day after the contract expires.

The special BART strike website helps commuters plan ahead and prepare for a BART standstill. San Francisco Department of the Environment recommends working from home as the best option.

Since thousands more cars are expected to hit the road, drivers should brace themselves for heavy traffic and extended travel time. They are encouraged to avoid peak travel times and instead travel earlier or later.