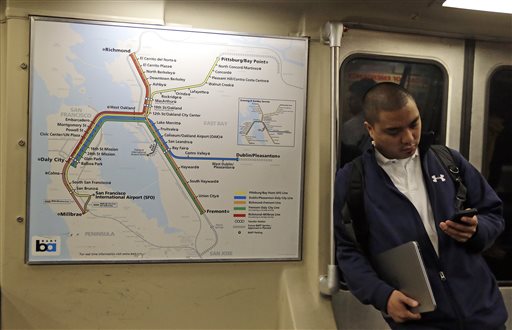 The strike happened after talks between the San Francisco Bay Area Rapid Transit and its two unions, Service Employees International Union Local 1021 and Amalgamated Transit Union 1555, broke down on Thursday, reaching an impasse.

Workers planned to go on strike around 3 p.m. after the impasse, and federal mediators went back to Washington.

“We made concessions, but you can only bend so far before you break,” Sanchez said, reported the San Francisco Chronicle. “This is the way they want to solve the conflict, in a fight, a street fight.”

Sanchez said the unions offered to settle the remaining unresolved issues through binding arbitration (bringing an independent third party in to make the final decision), but BART management refused.

“I’m sorry, I’m regretful. I don’t know what to say to the public who have put such faith in the leadership and the (union workers),” she said. “The employer has been unwilling to reach an agreement or to settle these disputes without a strike.”

Service updates and options from 511, including information about limited round trip charter bus service.

The San Francisco Ferry will have departures every 45 minutes starting at 5:30 a.m.

ACTransit will convert the West Grand Avenue approach to the Bay Bridge into temporary HOV lanes.

In addition, AC Transit plans to:

-Augment its existing commute services with additional buses, to the extent possible. The agency has extra buses to potentially enhance our existing services, depending on the availability of drivers and whether any of the surplus buses are needed to replace regular buses that may inadvertently require maintenance.

-Deploy largest buses to the transbay service and increase the number transbay trips, to the extent possible.

– The Customer Service Call Center will operate from 6:00 a.m. to 7:00 p.m. and additional agents will be available to handle trip planning and other phone inquiries.

-Move all bus stops at BART stations to locations on the street outside of the train stations for the boarding and unloading of passengers.

-Provide staff at the Transbay Terminal and BART stations to assist riders by directing them onto the proper bus to reach their destinations.

-Route all Line 21 buses in Alameda to the Harbor Bay Ferry terminal during peak commute hours.

Finally, the transit agency advises all riders to be patient, use exact fares—preferably in coins– when boarding a bus, and leave early for your destinations, at least a half hour or more, if possible.