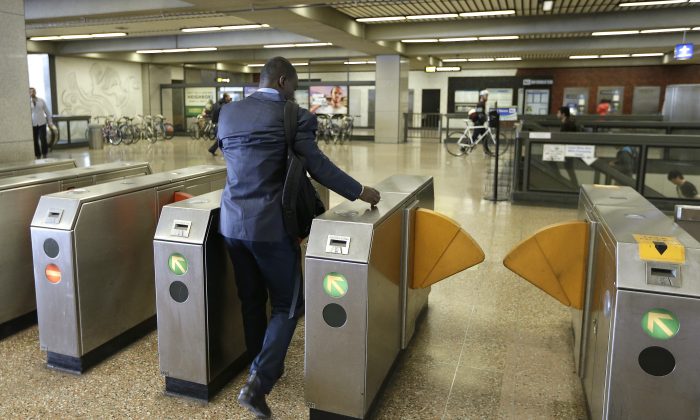 BART unions postponed a strike at the last minute for the third straight night, saying they won’t strike on Wednesday as negotiations continue.

“There will be train service operating all day,” George Cohen, a federal mediator, told reporters after 10 p.m., reported the San Jose Mercury News.

The unions have pushed back a strike for three days straight as both sides have gotten closer to an agreement.

“I know the riding public would like to know what’s going on and we’re working very hard so that we can get a deal done,” said Josie Mooney, the SEIU’s chief negotiator.

At times, the threats make a strike seem imminent, only for the unions to later back off.

For instance, unions said on Monday afternoon that the public “should prepare for alternative transportation” for Tuesday’s commute.

“Unless something breaks and there is a Hail Mary, there will be a strike,” a representative of the unions told reporters at 5:10 p.m. PDT, reported CBS.

Tom Radulovich, the board president for the Bay Area Rapid Transit (BART) transit agency, called for representatives of the Amalgamated Transit Union Local 1555 and the Service Employees International Union Local 1021 to let its more than 2,300 members vote on the agency’s final offer presented Sunday.

“We’ve been at this for a total of 150 days at this point and we think it’s time for the union leadership to let us know, to let the people in the Bay Area know whether they are going to take an offer to their membership,” Radulovich said.

BART trains ran on a normal schedule Tuesday as unions and management returned to the bargaining table just hours after marathon negotiations ended around 5:30 a.m. The parties had agreed to extend labor talks past a midnight Monday deadline.

The BART unions, ATU Local 1555 and Service Employees International Union Local 1021, had said they would go on strike if they didn’t reach a contract deal by midnight Monday after extending stalled negotiations from over the weekend.

Workers at a major regional bus line have also threatened to strike this week if their conditions for a new contract aren’t met.

Hundreds of thousands of people in cities like Oakland and Berkeley depend on the two transit systems for their daily commutes and would spill out into already congested roadways or be left stranded without a mass transit alternative if the strikes coincide.

BART is the nation’s fifth-largest rail system. Alameda-Contra Costa Transit District buses, which serve the East Bay and also provide service in and out of San Francisco, carry about 100,000 people roundtrip.

The buses served as alternative transportation for many BART train riders during a nearly five-day strike in July.

On Tuesday, the AC Transit board requested that Gov. Jerry Brown intervene in the labor dispute and impose a 60-day cooling off period. The board said that a bus strike would significantly endanger the public’s health, safety and welfare.

AC Transit workers have rejected two contract proposals that would have given workers a 9.5 percent raise over three years as they would also have to contribute more toward their health plans.

Different branches of the same parent union, the Amalgamated Transit Union, are involved in both labor negotiations. While they’re about two different contracts, workers for each are pushing for similar benefits. And each local chapter has been monitoring the other’s labor situation intently.

Union officials deny any coordination. Still, the specter of both transit agencies striking at the same time could give leverage if the governor doesn’t delay the bus workers strike.

A sign that some progress was being made in the BART talks came late Monday when SEIU Local 1021 executive director Pete Castelli told reporters that the unions had sentBART a counterproposal that was being discussed by management.

“We did make movement,” Castelli said. “We want people to know we are up there working.”

Sticking points in the 6-month-old negotiations include salaries and workers’ contributions to their health and pension plans. BART officials confirmed early Tuesday that some progress has been made but economic issues still need to be hammered out.

BART presented a “last, best and final offer” that includes an annual 3 percent raise over four years and requires workers to contribute 4 percent toward their pension and 9.5 percent toward medical benefits.

BART General Manager Grace Crunican said the unions had two weeks to accept the deal before it would be taken off the table.

Castelli said Monday that the parties were somewhere between $6 million to $10 million apart over four years.

Workers from the two unions, which represent more than 2,300 mechanics, custodians, station agents, train operators and clerical staff, now average about $71,000 in base salary and $11,000 in overtime annually, the transit agency said. BART workers currently pay $92 a month for health care and contribute nothing toward their pensions.