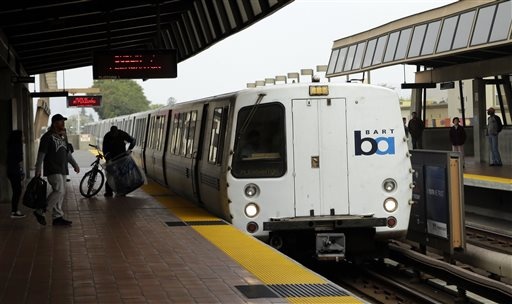 A BART strike was held on Friday–the second time in 2013–with unions giving an update to confirm that it is happening.

OAKLAND, Calif. (AP) — People in the San Francisco Bay area faced a frustrating Friday commute as workers for the region’s largest transit system walked off the job for the second time in four months.

Officials from both unions representing workers for Bay Area Rapid Transit as well as the agency itself confirmed the strike.

The walkout began at midnight Thursday, the culmination of six months of on-again, off-again talks that fell apart. The impasse came after a marathon negotiating session that led the agency and its two largest unions closer to a contract deal.

About 400,000 riders take BART every weekday on the nation’s fifth-largest commuter rail system. The system carries passengers from the farthest reaches of the densely populated eastern suburbs to San Francisco International Airport across the bay.

Antoinette Bryant of Amalgamated Transit Union told The Associated Press early Friday morning that her workers were on strike as of midnight, while Cecille Isidro of the Service Employees International Union confirmed to the San Francisco Chronicle that the unions were striking.

Agency spokesman Rick Rice also confirmed the strike by the unions in an email sent early Friday, but he said that the trains would finish their runs early Friday so riders wouldn’t be stranded.

“They don’t need to strike,” he said. “They could instead take BART’s offer to a vote of their members or continue to discuss options that could lead to a resolution.”

She said the unions suggested taking the remaining issues to arbitration but management refused.

BART General Manager Grace Crunican countered that the agency needed to alter some of those rules to run the system efficiently. She said BART also needed to control costs to help pay for new rail cars and other improvements.

“We are not going to agree to something we can’t afford. We have to protect the aging system for our workers and the public,” Crunican said.

She urged the union leaders to let their members vote on management’s offer by Oct. 27.

The impasse came after intense, round-the-clock talks with the participation of federal mediators to end the contract dispute that has left many riders under the repeated threat of a commute-crippling strike.

A four-day strike in July saw commuters lining up early in the morning for BART’s charter buses, ferries across the bay, and enduring heavy rush-hour traffic on the San Francisco-Oakland Bay Bridge.

The threat of the latest strike prompted many to search for alternative forms of transportation for Friday’s commute.

“I don’t want to get in my car again,” BART rider Kyle Brunnette, 53, of El Cerrito said. “I think the public would have such bad blood this time around for both BART and the unions if there is astrike.”

The San Francisco Municipal Transportation Agency said it has developed plans to help people to get around, including providing two expanded carpool locations.

The key issues during most of the talks had been salaries and worker contributions to their health and pension plans.

Talks began in April, three months before the June 30 contract expirations. The unions initially asked for 23.2 percent in raises over three years. BART countered with a four-year contract with 1 percent raises contingent on the agency meeting economic goals.

The unions contended that members made $100 million in concessions when they agreed to a deal in 2009 as BART faced a $310 million deficit. And they said they wanted their members to get their share of a $125 million operating surplus produced through increased ridership.

The unions, which also include Amalgamated Transit Union, Local 1555, said one of the work rules that BART wanted to change was employees’ fixed work schedules. Mark Mosher, a communications consultant with SEIU Local 1021, said some workers work 4-day, 10-hour shifts while others work 5-day, 8-hour shifts.

“Some want longer work hours and shorter shifts due to child care, for some, it’s the only way a two-earner family can organize child care, but BART wants to schedule people whenever they want,” Mosher said.

On Sunday, BART negotiators presented a final offer that includes an annual 3 percent raise over four years and requires workers to contribute 4 percent toward their pension and 9.5 percent toward medical benefits.

Workers represented by the two unions, including more than 2,300 mechanics, custodians, station agents, train operators and clerical staff, now average about $71,000 in base salary and $11,000 in overtime annually, the transit agency said. BART workers currently pay $92 a month for health care and contribute nothing toward their pensions.