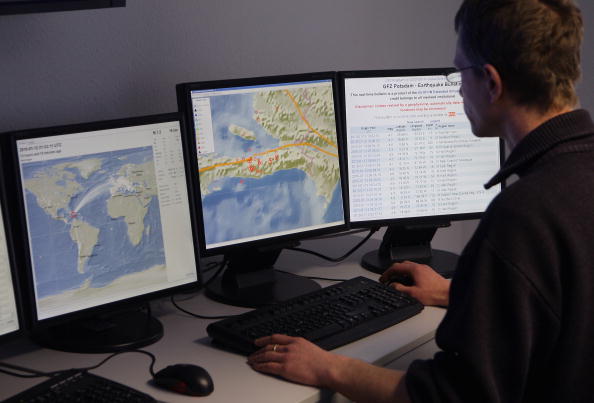 During a 15-minute span this morning on BART, passengers were witness to the rollout of an upgraded earthquake early warning system.

The warning system is designed to automatically kick in during an earthquake, slowing trains to a halt and giving passengers valuable seconds and even minutes to drop, cover or hold on.

The upgraded early warning system was developed by the U.S. Geological Survey, the University of California at Berkeley, the California Institute of Technology and the universities of Washington and Oregon, in partnership with the California Office of Emergency Services.

The alert system relies on sensors in California, Oregon, and Washington, and kicks in when those sensors detect early waves from an earthquake.

The information is then processed to determine the size and location of the event so that a forecast of the quake’s intensity can be sent out, from seconds to minutes before damaging shaking begins.

During a news conference at the downtown Berkeley BART station, after the demonstration, officials said connecting the warning system to BART was a critical step.

To be able to warn someone in advance of a damaging quake “is incredible,” said State Sen. Jerry Hill, D-San Mateo.

“This is not only a game-changer, it’s a life-saver,” Hill said.

BART has been slowing or stopping trains in advance of expected shaking for a few years. On Oct.8 demonstration marks the formal rollout of the upgraded version.

Richard Allen, director of UC Berkeley’s Seismological Laboratory and one of the developers of the system, said he was recently riding a BART train during a 3.5 quake and the system worked.

The train slowed, an announcement was made and passengers were informed of what was happening.

“Everyone was checking their phones,” Allen said. “The intent is to make future earthquakes as uneventful as possible.”

Several agencies and companies, including Chevron and PG&E, are already pilot users of the warning system.

The eventual goal is to send out alerts to everyone affected, sending messages to smartphones, but the technology hasn’t been developed yet to do that, Allen said.

The ShakeAlert system is being offered to all Bay Area agencies, businesses and utilities. The system can alert surgeons doing delicate operations, open firehouse doors so engines don’t become trapped, shut off valves to conserve water to fight fires and close down chemical lines at industrial sites, officials said.