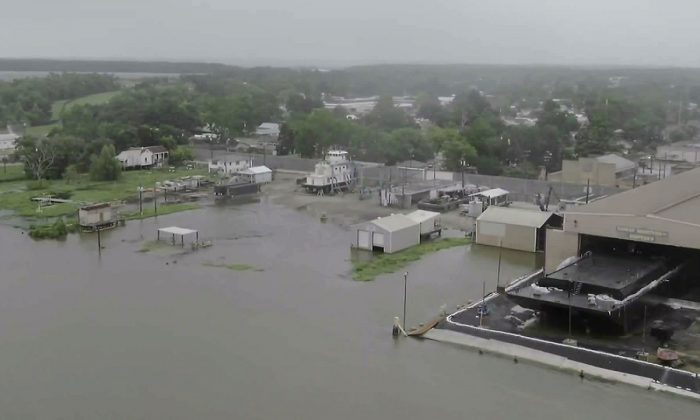 Early signs of flooding from Barry are seen Friday via drone in Morgan City, Louisiana, on July 13,2019. (CNN)
US News

Barry strengthened into a Category 1 hurricane on Saturday morning as it neared the Louisiana coast, the National Hurricane Center said.

The center of the storm as of 11 a.m. ET was about 40 miles south of Lafayette, Louisiana, and about 50 miles west of Morgan City, Louisiana, with maximum sustained winds of 75 mph and creeping at 6 mph.

Hurricane Barry is expected to make landfall at some point Saturday.

Tropical Storm Barry unloaded powerful winds and heavy rains as it edged closer to landfall Saturday along the Louisiana coast.

Landfall is expected within the next few hours along the Louisiana Coast https://t.co/tZoNuYL1uS

Barry is set to hit land Saturday morning or early afternoon as a Category 1 hurricane, the National Hurricane Center said. Its slow trek means a longer period of heavy rainfall and related flooding that will last through next week, forecasters said.

Across the region, cities and parishes have issued mandatory evacuation orders, especially in low-lying areas and those outside public levee protection, along with voluntary evacuation warnings for other places, the governor said. For the first time since their construction, all major floodgates on the Mississippi River are closed, he added.

The state’s forces also have mobilized in anticipation of search and rescue missions, he said.

A rescue already was underway midmorning Saturday — and more calls for help had come in — in coastal Terrebonne Parish, east of Morgan City, the US Coast Guard said. At least a dozen people needed to be saved along Island Road, effectively a bridge that traverses the marshy bayou that opens into the gulf.

Four people and a cat were picked up by a MH-65 Dolphin helicopter and taken inland to Houma, Louisiana, Coast Guard Petty Officer Lexie Preston said. A 24-foot Coast Guard response boat also was launched from Morgan City to help with rescues.

Following President Trump’s state of emergency declaration, Louisiana officials activated 3,000 National Guard members in anticipation of Barry, the governor said. And despite the state’s long-honed expertise in facing this sort of threat and its enhanced post-Katrina storm defenses, residents were urged to be prepared.

Though heavy, sustained rain still threatens the New Orleans area, fears there have relaxed as a predicted storm surge on the unusually high Mississippi River happened late Friday at a lower level than forecast, according to the National Weather Service in New Orleans. The developing factors had set off fears among some residents of the death and destruction wrought in 2005 by Hurricane Katrina, though weather and flood-infrastructure circumstances are not the same now.

A hurricane warning is in effect along part of the Louisiana coast, while inland areas, including the lower Mississippi Valley, are under tropical storm warnings. Storm surge warnings along the coast extend from Intracoastal City, south of Lafayette, to Biloxi, Mississippi, and along Lake Pontchartrain.

Tropical storm Barry is set to make landfall as a Category 1 hurricane in Louisiana.https://t.co/8jOb8Fgvkn

Tropical-storm-force winds will extend up to 175 miles outward from the storm’s center, which at 8 a.m. ET Saturday was still 50 miles west-southwest of Morgan City, Louisiana, forecasters said.

More than 62,000 customers across Louisiana were without power on Saturday morning, utility providers said. Hundreds of flights in New Orleans were canceled, and some cruise ship departures were in flux.

The Real Danger is The Rain: Governor

Top of mind as Barry nears land is the heavy rains and related flooding expected to usher in.

“We are talking about 18-24 hours after landfall, the rain will still be coming down and will be the issue,” CNN Meteorologist Michael Guy said.

Gov. John Bel Edwards said some areas could see up to 25 inches of rain.

“Nobody should take this storm lightly just because it’s supposed to be a Category 1 (hurricane) when it makes landfall,” the governor said. “The real danger in this storm was never about the wind anyway, it’s always been about the rain, and that remains a very significant threat.”

When the ground is as saturated as it already is in the region, the governor said, the risks are endless. “It doesn’t take much wind to cause a tree to fall or a utility pole to fall,” he said. “These hazards are going to present themselves all over the state.”

Barry is nearing hurricane strength with winds of 70 mph. On Barry’s latest projection, it is expected to make landfall in about 3-5 hours just west of Marsh Island: https://t.co/Yf5ryCU4yX https://t.co/hAy5zBd6EK

In Morgan City, where the hurricane is expected to make landfall, officials and city workers are worried about lingering water. The fishing and oil hub is about 70 miles southwest of New Orleans and south of Lafayette.

With up to 30 inches of rain projected this weekend for the region, Mayor Frank “Boo” Grizzaffi worried it may be more than the city’s drainage system can take.

“We can handle the first 5 inches, but after that, we can pump 1 inch per hour. If we get rain greater than that, it will exceed our capacity to pump it out,” he told CNN.