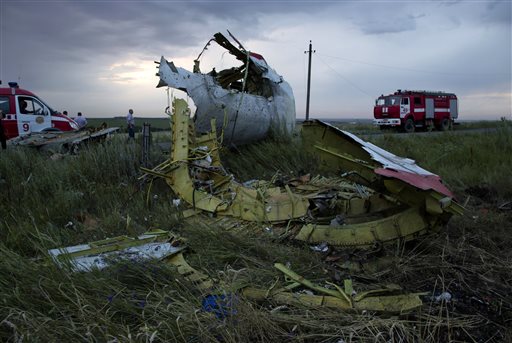 Fire engines arrive at the crash site of a passenger plane near the village of Hrabove, Ukraine, as the sun sets Thursday, July 17, 2014. Ukraine said a passenger plane carrying 295 people was shot down Thursday as it flew over the country. (AP Photo/Dmitry Lovetsky)
Europe

A British couple was nearly on board Malaysia Airlines Flight MH17, which was shot down over Ukraine on July 17.

They had been planning to fly on the flight but were told that there weren’t enough seats so they switched to a later KLM flight.

9 British passengers were among the 298 on board MH17, Malaysia Airlines said in its most recent update. 154 Dutch, 42 Malaysian, 27 Australian, and 12 Indonesian persons were on board as well, in addition to other nationalities.

“You get this sick feeling in the pit of your stomach […] We started getting butterflies. Your heartbeat starts going,” Sim told the Telegraph, referring to his response to hearing that MH17 went down. No survivors have been identified as the plane broke up mid-air and pieces were strewn over a span of miles in eastern Ukraine near the border with Russia.

“There must have been someone watching over us and saying ‘you must not get on that flight,'” added Izzy.

“In my mind lightning never strikes twice in the same place so I am still philosophical that you get on the flight and you go about your life,” added Barry. “I know my wife doesn’t feel like that. Probably the last thing she wants to do now is fly, especially to Kuala Lumpur.”