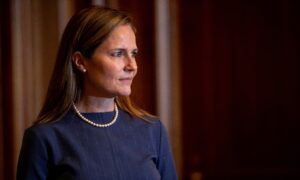 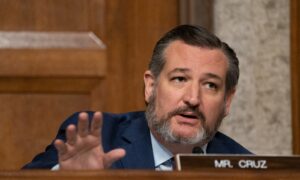 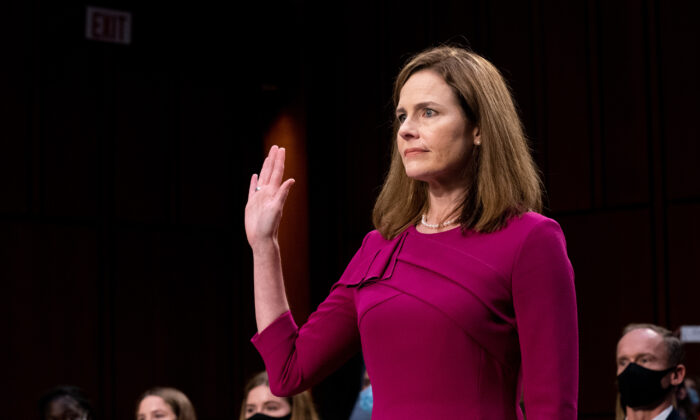 Barrett Tells Senate She Will Interpret Laws ‘As They Are Written’

Judge Amy Coney Barrett delivered her first remarks in front of the Senate Judiciary Committee on Monday and vowed to interpret laws “as they are written.”

“I have been nominated to fill Justice Ginsburg’s seat, but no one will ever take her place,” Barrett told the Judiciary Committee. It came after committee Chairman Lindsey Graham (R-S.C.) swore in Barrett to speak in front of the panel.

“As I said when I was nominated to serve as a Justice, I am used to being in a group of nine—my family. Nothing is more important to me, and I am so proud to have them behind me,” she also said, adding that “my father was a lawyer and my mother was a teacher, which explains why I ended up a law professor. More important, my parents modeled for me and my six siblings a life of service, principle, faith, and love.”

As expected, Barrett noted that she is a proponent of former Justice Antonin Scalia’s legal theories and had served as a clerk for him before his death in 2016.

“I felt like I knew the justice before I ever met him, because I had read so many of his colorful, accessible opinions,” she remarked. “More than the style of his writing, though, it was the content of Justice Scalia’s reasoning that shaped me. His judicial philosophy was straightforward: A judge must apply the law as it is written, not as she wishes it were. Sometimes that approach meant reaching results that he did not like. But as he put it in one of his best known opinions, that is what it means to say that we have a government of laws, not of men.”

A copy of her four-page statement was released to media outlets on Sunday. Before that, she was nominated to the court by President Donald Trump after the late Justice Ruth Bader Ginsburg’s death last month.

It came after Democrats on the Judiciary Committee attempted to tie Barrett to a notion that she would dismantle the Affordable Care Act (ACA), known as Obamacare. They also accused Republicans of engaging in an illegitimate process, while asserting that the winner of the Nov. 3 presidential election should be the one to decide on replacing Ginsburg.

On the panel, Republicans described Barrett as a thoughtful judge with phenomenal credentials.

Republicans appear to have enough votes to confirm Barrett for a lifetime seat on the Supreme Court—barring any unforeseen consequences. Last month, several GOP senators who were seen as possible swing votes, including Sen. Mitt Romney (R-Utah), said they would vote in favor of her confirmation.

During the hearing, the CCP (Chinese Communist Party) virus loomed over the proceedings as Trump was diagnosed with the disease several weeks ago. Senate Democrats attempted to delay the confirmation hearing by saying it’s risky for the Senate to hold hearings due to the pandemic.

The hearing on Monday will be the first of a four-day process as part of a timetable Senate Republicans to confirm her before the election.