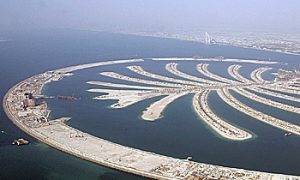 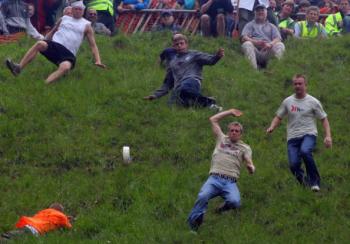 Contestants in the men's race chase a Double Gloucester Cheese down the steep gradient of Cooper's Hill during the annual Bank Holiday tradition of cheese-rolling on May 25, 2009 in Brockworth, Gloucestershire, England. (Matt Cardy/Getty Images)
Opinion

When spring comes around, and the moon is right, I hope to see its bristling power for the first time myself.

Not Ye Olde English for a breed of pig, the Severn bore is a tidal wave that sweeps up the river estuary with enough force to carry surfers for miles, conjured up by the combination of the second largest tidal range in the world and a perfect funnel-shaped estuary.

It is the same extraordinary tidal power that planners had hoped could generate 5 percent of the U.K.’s electricity, in what would have been the largest sustainable energy project in the world.

But with concerns over environmental impact, and the government unwilling to foot the massive bill in a new age of austerity, the plan for a 10-mile wide barrage was shelved last week.

Locals had worried that the barrage would wreak havoc not only with the local wildlife, but also with their precious bore.

As I read the news, I too was relieved.
Even though it is a good 50 miles from the sea proper, my hometown of Gloucester is the final point reached by the extraordinary wave.

Every spring the town would murmur with talk of the bore, the best places to see it, the exact time it might appear, and boasts about strange distant relatives who had once ridden the beast.

But every spring, the idea of actually going to see the bore washed over me like so much of the adult world.

It was only on moving out of the city as an adult that I realized the bore itself was a global phenomenon—one of only a handful of surfable bores around the world.

I began to feel proud of the same bore that to me as a teenager had always been something of … well … a bore.

Hearing of the scrapping of the barrage plans, I felt ashamed to have never seen the bore and thought over which other treasures I may have missed in my hometown.

The only other event that sends such a flutter of pride through my limbs is the local cheese rolling competition. Hardly sounds like a global phenomenon on a par with a unique natural phenomenon like a surfable river wave, you might think, just as I used to think when I was growing up. But like me, you’d be wrong.

From my old bedroom window, about three miles off, you can see a rather plain looking grass slope cut against the trees of a rather innocuous hill.

But get up close, and that slope turns into a 300-yard green leviathan that towers menacingly over you, or stretches down before you like a soft cliff.

Puffing and panting my way up the tussocks of Cooper’s Hill on weekend family walks, I was used to the stories of people throwing themselves down the hill, breaking limbs and knocking heads as they chased a wheel of cheese to the bottom of the 70 degree slope. Just another local oddity.

But bizarrely, like the Double Gloucester cheese that thunders down the slope ahead of the racers every year. The race has gathered momentum in recent years, drawing more and more national and international news interest and competitors from around the world.

The bore and the cheese race are now firmly embedded in the news calendars. It’s time to put them in mine.