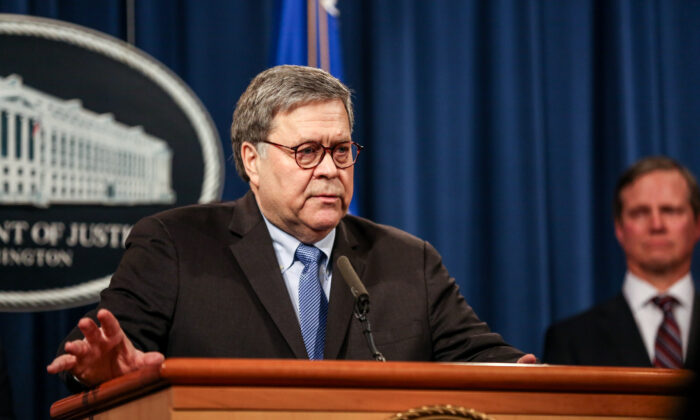 Attorney General William Barr reiterated his concerns over district attorneys (DAs) who have vowed not to enforce categories of crime, saying that their policies are “pushing a number of America’s cities back toward a more dangerous past.”

This growing number of non-traditional DAs—many who are known as progressive prosecutors or social reform DAs—have been repeatedly criticized by senior leaders at the Justice Department (DOJ) along with many legal experts who are concerned that their policies promote a lack of respect for the rule of law, undermine the separation of powers, increase the risk to public safety, and threaten to undo the DOJ’s progress in reducing crime across the country.

Many of these DAs have won their offices by seeking to implement what they claim to be a more balanced approach to criminal justice in their efforts to “fix” the system. Their policies steer away from the traditional tough-on-crime approach toward less punitive measures, pledging to increase police accountability.

Barr said that these policies strike at the “very root of our law enforcement system” and lead to greater criminality. He said under these policies the homicide rates for several cities have seen an increase, with Philadelphia’s murder rate reaching its highest point in over a decade, despite a falling nationwide crime rate.

According to the Philadelphia Police Department, the homicide count in 2019 was 356, which is the highest its number since 2008. Philadelphia’s attorney general office is led by Larry Krasner, a notable progressive prosecutor who has faced criticism for his extreme plans for criminal justice system reform. Since taking office in 2018, Krasner has implemented policies that he said would reduce prosecution, repeatedly clashing with law enforcement. The police department reported a 5 percent increase in violent crime offenses—which include homicide, rape, robbery with a gun, and aggravated assault–between 2018 and 2019.

“These DAs think they are helping people, but they end up hurting them,” Barr said during his remarks at the Major County Sheriffs of America (MCSA) Winter Conference on Tuesday. He was presented with the MCSA President’s Award during the event.

The attorney general said that the U.S. criminal justice system is based on a graduated response where punishment is imposed based on an individual’s criminal history. He said this means it is important to collect accurate criminal histories in order to protect the safety of the community.

“Even if we are going to treat early, and petty offenses leniently, we still need them charged and recorded so we know who we are dealing with as time goes by,” he said. “Our whole system is undermined by the practice of ignoring whole categories of criminal offenses.”

Barr added that the policies also “sabotage the effectiveness” of community policing and Precision Policing—a policing approach pioneered by the New York Police Department that targets a smaller number of suspects by focusing on data and information to build investigations.

He said the DA policies are undermining the effective policing approaches that have “taken decades of painstaking work to build,” referring to a New York case where a man who was set to testify against MS-13 was killed by one of the gang members. Some have said the witness was killed as a result of new reforms of the pre-discovery process that requires the prosecution to share information with the defense. Defense attorneys in the case were provided the witness’s identity but denied sharing it with the defendant, according to Newsday.

“We understood that because crime, particularly violent crime, is committed by a small segment of our population, repeat offenders need to be taken off the streets,” Barr said.

His comments on Tuesday comes after the attorney general announced that the department was significantly escalating its efforts against jurisdictions that implement “policies and laws designed to thwart the ability of federal officers to take custody of these criminals and thereby help them escape back into the community,” commonly known as sanctuary policies.

He revealed several measures the department was taking in order to ensure the “the proper and lawful functioning of our nation’s federal immigration system,” including suing several states over their sanctuary policies, assessing whether jurisdictions across the country are complying with federal criminal laws, and reviewing the actions of certain district attorneys who may have implemented policies that charge foreigners with lesser offenses that would shield them from federal immigration consequences.