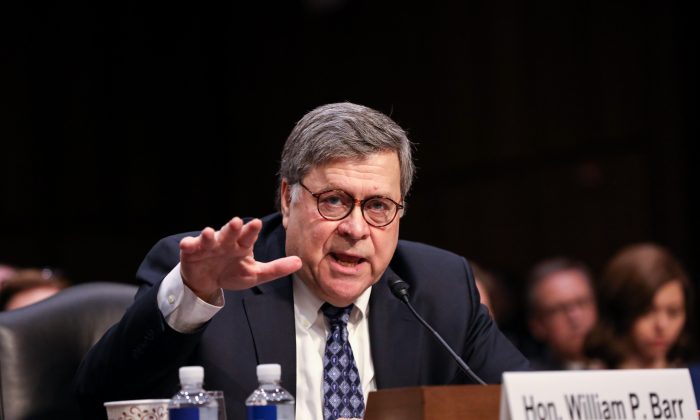 Attorney General nominee William Barr testifies on the first day of his confirmation hearing in front of the Senate Judiciary Committee at the Capitol in Washington on Jan. 15, 2019. (Charlotte Cuthbertson/The Epoch Times)
Trump Administration

Attorney General William Barr said that special counsel Robert Mueller was wrong when Mueller said he could not recommend charging President Donald Trump with a crime if enough evidence existed.

Mueller, speaking for the first time since the submission of his report to Barr, claimed on May 29 that his team’s avoidance of a traditional prosecutorial decision—a recommendation to press charges or not—was due to Department of Justice policy.

“Under long-standing Department policy, a President cannot be charged with a federal crime while he is in office. That is unconstitutional. Even if the charge is kept under seal and hidden from public view—that too is prohibited,” Mueller said, citing the department’s Office of Legal Counsel.

“Charging the President with a crime was therefore not an option we could consider,” he added.

Barr, the head of the department and therefore Mueller’s boss, said that that simply was not true.

“I personally felt he could’ve reached a decision,” Barr said during an interview with CBS on May 30. Barr said Mueller “had his reasons” for not making a recommendation but declined to explain, adding: “I’m not going to, you know, argue about those reasons.”

Barr said the office’s opinion was relevant but didn’t prohibit what Mueller thought it did.

“The opinion says you cannot indict a president while he is in office, but he could’ve reached a decision as to whether it was criminal activity,” Barr said.

“I’m going to make the decisions based on the law and the facts and I realize that’s in tension with the political climate we live in because people are more interested in getting their way politically.” — AG Barr tells @JanCBS

When Mueller’s team punted on making the decision on obstruction, Barr and Deputy Attorney General Rod Rosenstein stepped in and reviewed the 10 cases Mueller highlighted in his report. They also reviewed other evidence and found there wasn’t enough to conclude that Trump obstructed justice.

Barr was also asked about Mueller seeming to suggest that Congress continue the investigation, which lasted for about two years and cost tens of millions of dollars.

“I’m not sure what he was suggesting,” Barr said. “But the Department of Justice doesn’t use our powers of investigating crimes as an adjunct to Congress.”

Barr said on May 1 during an appearance before the Senate Judiciary Committee that he and Rosenstein were surprised that Mueller’s team didn’t reach a decision on obstruction.

“We did not understand exactly why the special counsel was not reaching a decision and when we pressed him on it, he said his team was still formulating the explanation,” Barr said of the March 5 meeting he and others had with Mueller.

“We don’t conduct criminal investigations just to collect information and put it out to the public,” Barr added. “I think that if he felt that he shouldn’t go down the path of making a traditional prosecutive decision, then he shouldn’t have investigated.”

“The Attorney General has previously stated that the Special Counsel repeatedly affirmed that he was not saying that, but for the OLC (Office of Legal Counsel) opinion, he would have found the President obstructed justice. The Special Counsel’s report and his statement today made clear that the office concluded it would not reach a determination—one way or the other—about whether the President committed a crime,” said Kerri Kupec, spokeswoman for the Department of Justice and Peter Carr, spokesman for the special counsel’s Office, in the joint statement.

“There is no conflict between these statements,” they added.