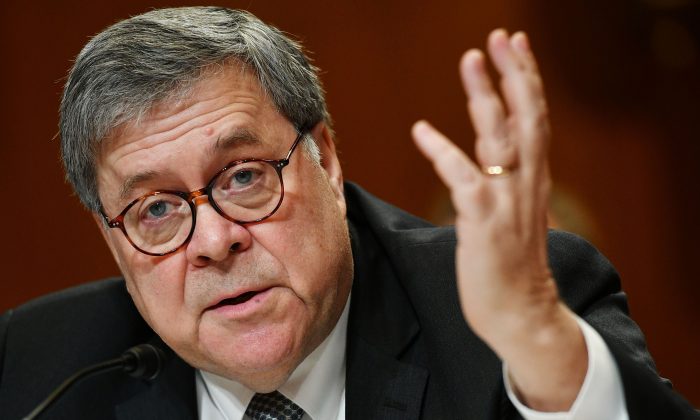 Barr: Mueller Couldn’t Explain Why He Made No Decision on Charging Trump

Attorney General William Barr said that special counsel Robert Mueller was not able to explain why his team didn’t decide whether or not to recommend charges against President Donald Trump over potential obstruction.

“We were frankly surprised that they were not going to reach a decision on obstruction,” Barr said in his opening statement before the Senate Judiciary Committee on May 1, reported the Wall Street Journal.

“We did not understand exactly why the special counsel was not reaching a decision and when we pressed him on it, he said his team was still formulating the explanation,” Barr said of the March 5 meeting.

Mueller’s team stated in the report (pdf): “We determined not to make a traditional prosecutorial judgment.”

The team cited an Office of Legal Counsel (OLC) opinion that the president could not be indicted or prosecuted while in office, but Barr said on Wednesday that Mueller had told him the office’s opinion was not a factor in his decision not to bring charges.

While the team could not establish obstruction, it said if it “had confidence” that the president did not, it would have said so.

“He said that in the future, the facts of the case might be such that a special counsel might consider abandoning the OLC opinion,” the attorney general said. “This is not such a case.”

“If we had confidence after a thorough investigation of the facts that the president clearly did not commit obstruction of justice, we would so state,” Mueller’s team wrote. “The evidence we obtained about the president’s actions and intent presents difficult issues that prevent us from conclusively determining that no criminal conduct occurred. Accordingly, while this report does not conclude that the president committed a crime, it also does not exonerate him.”

Barr said on Wednesday that once the team made the decision to punt on obstruction, it became his responsibility to make the choice based on the evidence gathered by Mueller in addition to other evidence from outside the investigation.

“We don’t conduct criminal investigations just to collect information and put it out to the public,” Barr said.

“I think that if he felt that he shouldn’t go down the path of making a traditional prosecutive decision, then he shouldn’t have investigated.”

Barr said in an April 18 press conference before the report was released to the public that Mueller’s team “did not make a traditional prosecutorial judgment regarding this allegation.”

“After carefully reviewing the facts and legal theories outlined in the report, and in consultation with the Office of Legal Counsel and other Department lawyers, the Deputy Attorney General [Rod Rosenstein] and I concluded that the evidence developed by the special counsel is not sufficient to establish that the president committed an obstruction-of-justice offense,” Barr added.

Barr said that he and Rosenstein kept in mind that Trump was facing “an unprecedented situation.”

“As he entered into office, and sought to perform his responsibilities as President, federal agents and prosecutors were scrutinizing his conduct before and after taking office, and the conduct of some of his associates. At the same time, there was relentless speculation in the news media about the President’s personal culpability. Yet, as he said from the beginning, there was, in fact, no collusion.”

Barr issued a summary in late March of the main conclusions in the report, including that Trump had been exonerated on alleged Russian collusion despite years of hammering by political opponents and a slew of media outlets. The summary was claimed to be misleading, but Rosenstein later defended how Barr handled the issue. The full report was issued several weeks later with redactions.

Barr said that the redactions were required by law.

On Wednesday, he said that he asked Mueller to submit the report with redactions already marked but that the special counsel’s office ignored the request after initially saying they could do so, causing the delay between the submission of the report to his office and the release of the redacted report to the public.