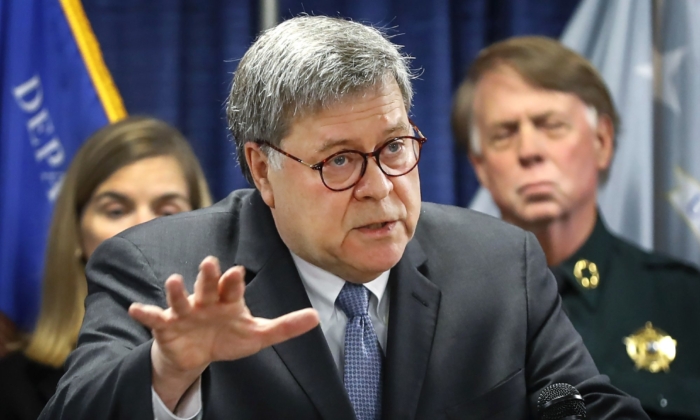 Attorney General William Barr, alongside officials from the Bureau of Alcohol, Tobacco, Firearms and Explosives, announces the launch of Project Guardian, an anti-gun violence initiative, during a news conference, at the Davis-Horton Federal Building in Memphis Tenn., on Nov. 13, 2019. (Mark Weber/Daily Memphian via AP)
US News

“Today, American people have to focus on something else, which is the sacrifice and the service that is given by our law enforcement officers,” Barr said on Tuesday during a Justice Department award ceremony that recognized distinguished service in policing.

“And they have to start showing, more than they do, the respect and support that law enforcement deserves. And if communities don’t give that support and respect they may find themselves without the police protection they need,” he added without specifying how communities might lose police protection.

He also recognized challenges faced by law enforcement officers in the line of duty while praising the officers for their courage to overcome these problems.

“You put your life and well being on the line to protect your communities and your family spends anxious nights, night after night, so the rest of us can sleep in peace. That job has always been a difficult job, but it’s probably been no time where it is more difficult than today,” he said.

During the ceremony attended by law enforcement officers, he recognized the work of 19 officers and deputies from 12 jurisdictions across the nation, including one posthumously recognized for his work in leading a criminal investigation into the violent MS-13 gang.

He praised law enforcement for displaying a “special kind of bravery” in tackling various problems in society like drugs and violent crime, while saying that officers are fighting an “unrelenting, never-ending fight against criminal predators in our society.”

“While their battles won and lost each day, there is never a final resolution. A final victory is never consigned and yet … you continue to perform your duty protecting the community day in and day out. And that takes a very special kind of courage to wage this kind of fight. A special kind of committed, a special kind of sacrifice,” he added.

Barr also compared police officers and deputies to soldiers returning home from the Vietnam war to underscore the lack of support and gratitude officers face in their community.

“In the Vietnam era, our country learned a lesson. I remember that our brave troops who served in that conflict weren’t treated very well in many cases when they came home. And sometimes they bore the brunt of people who were opposed to the war,” he said. “And the respect and gratitude owed them was not given. And it took decades for the American people finally to realize that.”

The attorney general’s comments drew criticism from liberal groups such as American Bridge, a liberal super PAC, who said Barr was targeting communities of color in his address, according to HuffPost.

Barr, who is known for his tough-on-crime approach, defended police officers in a speech in August, saying that there needs to be “zero tolerance for resisting police.”

“We are seeing disrespect for law enforcement in other ways. We were all nauseated by the spectacle of prancing punks pelting New York police officers with water and plastic buckets. Unfortunately, these were not isolated events. From 2014 through 2017, there has been a 20 percent increase in assaults against police, up to about 60,000 per year,” he said.

“This Administration will not tolerate violence against police, and we will do all we can to protect the safety of law enforcement officers.”