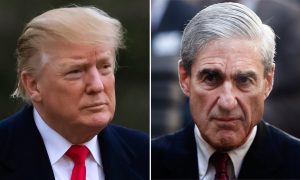 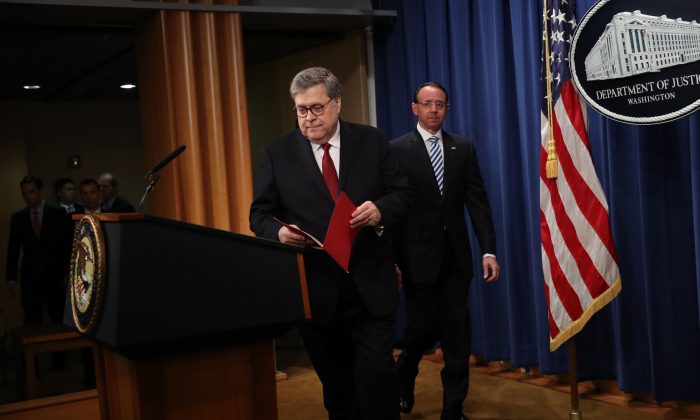 Attorney General William Barr (L) and Deputy Attorney General Rod Rosenstein arrive to speak about the release of the redacted version of the Mueller report at the Department of Justice in Washington on April 18, 2019. (Win McNamee/Getty Images)
Trump Administration

“After carefully reviewing the facts and legal theories outlined in the report, and in consultation with the Office of Legal Counsel and other department lawyers, the deputy attorney general and I concluded that the evidence developed by the special counsel is not sufficient to establish that the president committed an obstruction-of-justice offense,” Barr said at a press conference.

Mueller, in his report, had not reached a prosecutorial judgment on the allegation of obstruction of justice and instead left the decision to the attorney general.

In their report, the special counsel team presented 10 different episodes, which it then used to discuss potential legal theories for connecting the president’s actions to obstruction of justice.

The 10 episodes presented are wide ranging, from the circumstances of FBI Director James Comey’s firing, to the allegation that Trump asked White House legal counsel Don McGahn to request that the Justice Department fire Mueller.

The episodes, which rely primarily on interviews conducted by the special counsel, suggest that Trump was looking for legal ways to speed up or end the investigation into alleged collusion between his campaign and Russia, which Trump considered baseless. Indeed, the probe didn’t substantiate the collusion allegations. Each time Trump proposed a way to speed up, curtail, or end the probe, according to the report, the officials informed Trump that the probe couldn’t be sped up or ended, at least not without creating a perception of meddling with the probe. In some cases, the officials didn’t push back, but simply didn’t act on Trump’s requests out of concern that those actions might be perceived as being improper.

Amid a torrent of media reports that pushed the collusion narrative—mostly based on accounts of unnamed “current and former officials”—Trump sought a way to have the FBI or the intelligence agencies correct the record or put out exonerating information. He told officials that the investigation was preventing him from conducting foreign relations, such as working with Russia on trade and defeating the ISIS terrorist group. Again, the officials pushed back, such as by saying it wasn’t their job to comment on an ongoing investigation.

While the report makes a case that it’s plausible Trump wanted the collusion probe to go away out of improper concerns, like shielding himself from further negative media coverage or preventing the FBI from uncovering some unspecified crimes, it acknowledges that Trump also could have been genuinely concerned that a baseless investigation was harming his ability to do his job.

“Apart from whether the acts were obstructive, this evidence of non-corrupt motives weighs heavily against any allegation that the president had a corrupt intent to obstruct the investigation,” Barr said.

The report made clear a “corrupt motive” is necessary to establish obstruction of justice, explaining that corrupt in this context “requires a concrete showing that a person acted with an intent to obtain an improper advantage for himself or someone else, inconsistent with official duty and the rights of others.”

According to former White House chief strategist Steve Bannon, Trump considered Mueller to be conflicted for several reasons: Mueller had worked for a law firm that in the past represented Trump’s family members; Trump had interviewed him for the FBI director job; and, years prior, Mueller had asked for a partial refund of a registration fee for Trump’s golf club. Bannon said he told Trump these issues didn’t amount to a conflict of interest.

According to McGahn, around May 23, 2017, just as Mueller was getting cleared by ethics officials for the role of special counsel, Trump asked McGahn to raise the issue of conflicts of interest with Rosenstein, who oversaw the Mueller probe. McGahn didn’t want to do that and told Trump not to do it either. He said perhaps Trump could have his personal lawyer raise the issue, but it would “look like still trying to meddle in [the] investigation.”

Trump had his lawyer talk about the conflicts with Mueller’s office on June 13, 2017, this time dropping the golf club issue, but adding Mueller’s relationship with Comey to the list of potential conflicts. Two days later, the office informed the lawyer that it had communicated the concerns to Rosenstein.

On June 17, 2017, McGahn said, Trump again asked him to raise the issue of conflicts of interest with Rosenstein. Based on McGahn’s account, Trump asserted that the conflicts were significant enough for Rosenstein to fire Mueller. “Mueller has to go,” McGahn recalled Trump saying.

McGahn said he understood Trump’s comments as directing him to go ask Rosenstein to fire Mueller. This time, however, he didn’t push back and instead told Trump he’d see what he could do and left Trump with the impression that he would indeed call Rosenstein.

McGahn then decided to resign—a move he later reconsidered. Trump didn’t bring up the issue again.

Trump later disputed McGahn’s account and said that he had only wanted McGahn to bring conflicts of interest to the Justice Department’s attention.