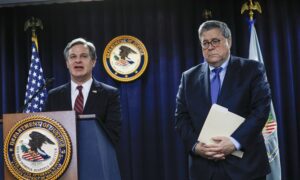 Attorney General William Barr said on Monday that he does not expect U.S. Attorney John Durham’s probe into the origins of FBI’s Russia investigation will result in criminal investigations into former President Barrack Obama and former Vice President Joe Biden.

Barr made the remarks during an unrelated press conference where he revealed Obama and Biden will unlikely be investigated by the Justice Department as part of Durham’s investigation based on the information he currently possesses.

“As to President Obama and Vice President Biden, whatever their level of involvement based on the information I have today, I don’t expect Mr. Durham’s work will lead to a criminal investigation of either man,” Barr said. “Our concern over potential criminality is focused on others.”

This comes as Obama and Biden are facing increasing scrutiny from Republican lawmakers for potential misconduct during the FBI’s 2016 counterintelligence investigation into Trump campaign’s alleged ties with Russia. President Donald Trump has repeatedly alleged, without naming specific crimes, that Obama and certain members of his administration were involved in a scheme to target Trump’s former national security adviser Lt. Gen. Michael Flynn and other associates of the president during 2016 and 2017.

The president revived his accusations in his hashtag “Obamagate” after a number of revelations in recent weeks. Documents released earlier this month indicated that Obama was aware of details from phone calls made by Flynn with then-Russian Ambassador Sergey Kislyak. Meanwhile, a declassified list of Obama administration officials who requested the unmasking of Flynn in intelligence reports, which was recently given to Congress, revealed that Biden and Obama’s then-chief of staff Denis McDonough were involved in the requests.

During the press conference, Barr was critical over the “increasing attempts” in the past decade to use the criminal justice system as a political weapon while he made the point that the Justice Department would not allow this to happen again under his watch.

“The legal tactic has been to gin up allegations of criminality by one’s political opponents based on the flimsiest of legal theories. This is not a good development,” Barr said. “This is not good for our political life. And it’s not good for the criminal justice system.”

“As long as I’m Attorney General, the criminal justice system will not be used for partisan political ends. And this is especially true for the upcoming elections in November,” he said.

Barr lamented the “grave injustice” that occurred against Trump during the 2016 presidential election and the first two years of his administration, but added that Durham’s investigation, which has become criminal, would not be used for retaliatory purposes.

“We saw two different standards of justice emerge, one that applied to President Trump and his associates and the other that applied to everybody else. We can’t allow this ever to happen again,” Barr said. “The Durham investigation is trying to get to the bottom of what happened. And it will determine whether there were any federal laws broken and if there were, those who broke the laws will be held to account but this cannot be and it will not be a tit for tat exercise.”

“We are not going to lower the standards just to achieve a result,” he added.

He said that the only way to break from the “vicious cycle” of improperly using the justice system for political purposes is to restore a “single and proper standard of justice for everybody.” He added that people need to be aware that there is a difference between abuse of power and a federal crime, citing a recent Supreme Court ruling in the Bridgegate case.

“Not every abuse of power, no matter how outrageous is necessarily a federal crime,” he said.

He said during such a “divided” time it was critical that the United States holds an election to allow the American people to make a choice between Trump and Biden “based on a robust debate of policy issues.”

Barr assigned Durham early in 2019 to investigate the origins of the FBI’s counterintelligence investigation of the Trump campaign and to assess whether the surveillance of Trump campaign associate Carter Page was free of improper motive. The probe was designated a formal criminal investigation later in 2019.

Barr previously indicated that he was “very troubled” by some of the information briefed by Durham, adding that the investigation was launched in order to uncover answers for “things that are unexplained.”

“I think we’re getting deeply into the situation, and we’ll be able to sort out exactly what happened,” Barr said.