Barr Calls Attack on Soleimani a Legitimate Act of Self-Defense 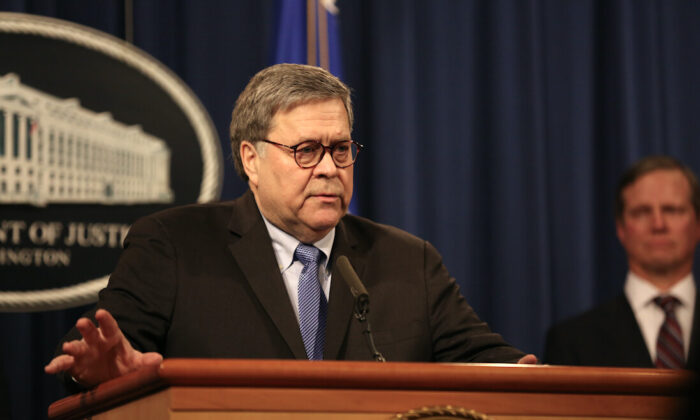 Attorney General William Barr speaks at a press conference at the Department of Justice in Washington on Jan. 13, 2020. (Charlotte Cuthbertson/The Epoch Times)
By Mimi Nguyen Ly

Attorney General William Barr on Monday said that the killing of the Iranian regime’s top military official, Qassem Soleimani, was a “legitimate act of self-defense.”

His remarks were made in response to a journalist’s question after Barr and other senior law enforcement officials announced the findings of a criminal investigation into the shooting at Pensacola Naval Air Station that occurred in December 2019 killing three U.S. sailors.

The journalist asked Barr to explain to those in Congress whether Soleimani’s killing could be considered a “constitutional strike” given that, as the journalist said, “obviously it was an act of war, and they [Congress] were not consulted.”

Soleimani was killed by a U.S. airstrike near Baghdad’s international airport on Jan. 2. The Pentagon confirmed that President Donald Trump ordered the strike, which was “aimed at deterring future Iranian attack plans.”

Barr told the gathered press that the Department of Justice had been consulted prior to the strike and that it was his view that Trump “clearly had the authority to act as he did,” citing multiple reasons.

Barr said that Soleimani had planned and orchestrated the attacks.

Read More
Damage to US Embassy in Baghdad Following Attack Revealed in New Photos
Inside the Plot by Iran’s Soleimani to Attack US Forces in Iraq: Reuters

“Our ability to deter attacks had obviously broken down,” Barr added. “The Iranians had been given a number of red lines and were crossing those lines. They obviously felt that they could attack us and continue these escalating attacks with impunity.”

As a result, Soleimani was “clearly a legitimate target,” Barr said.

According to U.S. intelligence, Soleimani was also in the process of planning future attacks.

Read More
Killing of Soleimani Was a Matter of Self Defense, Says Pentagon
Pence Says Sharing Soleimani Details With Congress Could ‘Compromise’ Sources

“We had a very brief window of time to carry out the attack when he arrived in Baghdad to plan and orchestrate follow up attacks on American interest,” Barr said, adding that taking out Soleimani was “was a legitimate act of self-defense because it disrupted ongoing attacks that were being conducted—a campaign against the Americans.

“And it reestablished deterrence, it responded to attacks that had been already committed,” Barr said. “Our purpose and our expectation was not to trigger a broader conflict or events which spin out of control. On the contrary, we believe that the strike would restore deterrence and help avoid a continuing upward spiral of the violence.”

The Quds (Jerusalem) Force has weaved an intricate web of influence in the region over the past several decades, including supporting various Shi’ite militias, the Hezbollah organization in Lebanon, the Houthis in Yemen, and others.

Trump said he believed Iran had targeted American embassies prior to Soleimani’s death.

“We will tell you, probably it was going to be the embassy in Baghdad,” Trump said in an interview with Fox News on Friday, adding, “I can reveal that I think it would’ve been four embassies.”

Secretary of State Mike Pompeo also told reporters on Friday that “attacks on U.S. embassies” would have likely been a focus for Iranian assets.

Secretary of Defense Mark Esper told CBS on Sunday that he shared the views expressed by Trump that Iran was going to conduct “attacks against additional embassies” in the region.

“I shared that view,” he said. “I know other members of the national security team shared that view. That’s why I deployed thousands of American paratroopers to the Middle East to reinforce our embassy in Baghdad and other sites throughout the region,” he said.