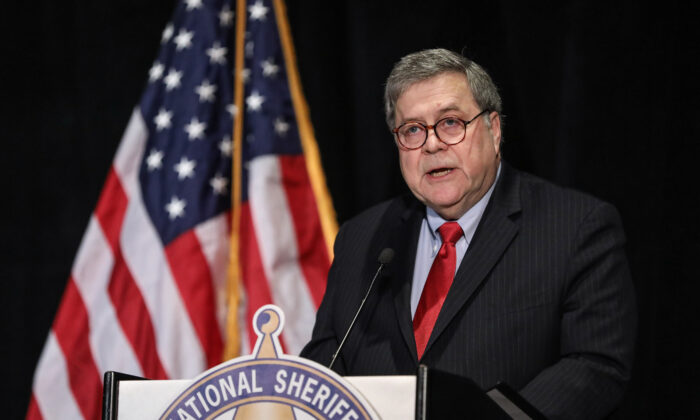 Barr made his remarks during the National Sheriffs’ Association Winter Legislative and Technology Conference in Washington where he expressed concerns over local and state “policies and laws designed to thwart the ability of federal officers to take custody of these criminals and thereby help them escape back into the community,” commonly known as sanctuary policies.

He said the department is significantly escalating its efforts to ensure the “the proper and lawful functioning of our nation’s federal immigration system” by taking legal actions against several states across the country for their sanctuary policies.

The DOJ, Barr said, has filed a complaint against New Jersey, its governor, and attorney general challenging a directive that forbids state and local law enforcement from sharing crucial information about criminal aliens with the Department of Homeland Security (DHS) such as the immigration status and release dates of individuals in their custody.

Similarly, the department is also suing King County in Washington state for the implementation of an order that intends to prohibit ICE contractors from using King County International Airport to deport criminal aliens or transport immigration detainees within the country.

The DOJ also said that has sued California, its governor, and attorney general for prohibiting the operation of private detention facilities in the state. Under the state law, known as A.B. 32, prisoners and detainees currently housed in private facilities in California will have to be relocated at great cost and risk isolating them from their families, the department said.

The lawsuit challenges A.B. 32, claiming that the legislation is unconstitutional by violating the Supremacy Clause under the Constitution because it obstructs the federal government from housing federal prisoners and detainees, effectively acts as an obstruction to “the accomplishment of congressional objectives related to criminal law and immigration enforcement,” directly regulates federal operations, and discriminates against the United States by granting exceptions for the state that do not apply to the federal government.

Barr also announced that along with lawsuits, the department will also assess whether jurisdictions across the country are complying with federal criminal laws. Moreover, the DOJ will cooperate with the DHS in its effort to obtain the information they need to carry out immigration enforcement operations including the use of federal subpoenas to access the required information. The department will also review the actions of certain district attorneys who may have implemented policies that charge foreigners with lesser offenses that would shield them from federal immigration consequences.

“In pursuing their personal ambitions and misguided notions of equal justice, these district attorneys are systematically violating the rule of law and may even be unlawfully discriminating against American citizens,” Barr said.

The DOJ’s actions are part of “a significant escalation” in the administration’s effort to “confront the resistance of ‘sanctuary cities,'” Barr said.

“But by no means do the efforts outlined above signify the culmination of our fight to ensure the rule of law, to defend the Constitution, and to keep Americans safe. We will consider taking action against any jurisdiction that, or any politician who, unlawfully obstructs the federal enforcement of immigration law,” he said.

Other departments also announced measures to target sanctuary policies, such as the DHS, who promulgated a rule that barred New York residents from enrolling and reenrolling in the federal government’s Trusted Traveler Programs (TTP) such as the Global Entry. The DHS said the policy change was in response to the New York’s newly enacted Green Light Law. The law, known as the Driver’s License Access and Privacy Act, allows illegal aliens to obtain a driver’s license without a social security number. It also bars the release of the applicant’s personal information to federal immigration authorities except when requested under a court order or judicial warrant.

On Monday, New York Attorney General Letitia James announced that she had filed a lawsuit against the administration over the ban. Barr also referenced the New York law in his remarks, saying that this effort is “unlawful.”

“States may not regulate the presence of aliens in the United States in a way that obstructs Congress’s regulation of aliens,” he said.

The president criticized “radical politicians” who provide sanctuary to criminal aliens during his State of the Union speech on Feb. 4. He underscored the dangers of letting criminal aliens free under sanctuary policies by citing examples in New York and California.