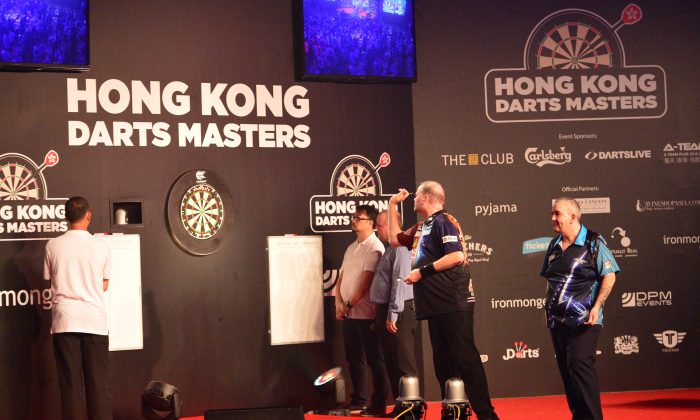 Raymond Van Barneveld of the Netherlands nails a triple 20 at the start of this game in the final of the Hong Kong Darts Masters 2015 against No.1 seed Phil Taylor in Hong Kong on Saturday Sept 5, 2015. Barneveld went on to win the best of 21 legs final 11-6. (Bill Cox/Epoch Times )
HK Sports

Hong Kong Darts Masters went according to plan right up to the final match of this top level competition, played last Friday and Saturday evenings September 4-5.

In the first Semi-finals played as the first two matches on Finals night, Van Barneveld played Bunting with Van Barneveld progressing to the final with a solid 10-7 win, in the best of 19 legs match. In the other Semi-final Taylor, cruised to a 6-0 lead against Hamilton taking them to the short break but on returning to the Hockey (throw line) Taylor seemed to lose his touch with Hamilton winning the next 6-games to draw level before Taylor finally pushed ahead again to win the match 10-6.

The first half of the final also produced some low scoring throws with both players struggling to find form. The match stayed on throw, to 3-3. But as Taylor continued to miss his trebles and doubles targets, Van Barneveld became more confident, picked up his game and started hammering in the big numbers taking the next 6-games. With the game at 9-3, Taylor finally got a good break to make it 9-4, but he knew it was all over.

Van Barneveld came away a worthy Champion securing the last few games in tremendous style for an 11-4 win. Taylor did show some patches of brilliance including finishes from170 and 103 but it was not his night, as Van Barneveld walked off with the trophy,