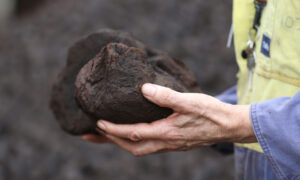 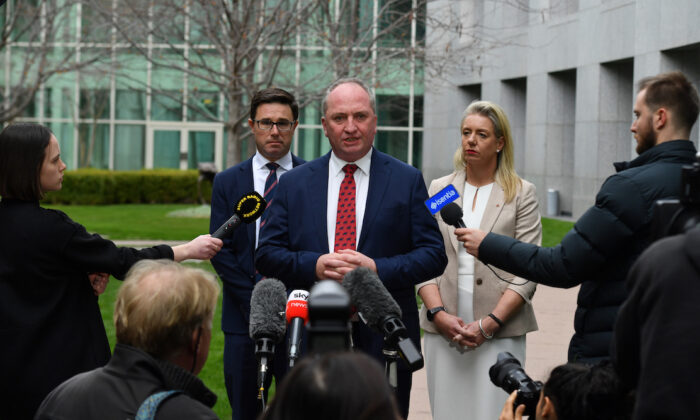 The newly installed Deputy Prime Minister of Australia Barnaby Joyce has indicated he will take a strong stance on China and climate change policies in Australia.

Joyce told his first party room meeting after winning majority support in a leadership spill on that Australia’s freedom could be challenged as other superpowers rise in the Asia-Pacific, pushing out the pax-Americana (American-led peace) that has been in place in the region since the end of World War II.

The party room speech comes after Joyce, on June 21, told Australians as the new deputy PM that he would maintain a strong stance on China and foreign investment in Australia.

“I will make sure we always protect this nation, understanding the nuance and complexities of also dealing with our biggest trading partner,” he said, referring to China. “The Nationals as a party bought about some of the most substantive changes in foreign investment laws when everybody was calling us bigots and rednecks and everything else under the sun.”

“Now, they just call us correct,” he said.

Joyce’s tough stand on the Asian power is not unexpected after he previously described China’s rise as a more important issue for the future than climate change. It also firms up the Coalitions tough stance on China, adding another “China Hawk” to the government’s front bench.

This will be Joyce’s second appointment as leader of the junior member of the ruling Coalition after he resigned and moved to the backbench in 2018 following allegations of sexual harassment.

The allegations were later found to have no merit, but the investigation did uncover Joyce’s extra-marital affair with a staffer. Joyce went on to establish a domestic partnership with the staffer. The couple now has two children.

“I’ve spent three years on the backbench and you know, I hope I come back a better person,” he said.

Joyce acknowledged that the backbench also gave him space to consider the impact of his actions not just on himself, but on others.

“I don’t want to dwell on the personal, except to say, hopefully, one learns from their mistakes and makes a better person of themselves,” he said.

The return of Joyce to the leadership of the Nationals has also reinvigorated the party’s advocacy for the needs of regional Australia when devising solutions for environmental issues and climate change.

Nationals Party Deputy Leader David Littleproud told Sky News on June 22 that while the party understood the need for net-zero carbon emissions by 2050, they wanted to make sure that the regional areas were not left wanting by any of the proposed solutions to achieve that goal.

“We get it all right, but we are not going to trade ourselves away until we can see the detail and see what we can get,” he said.

“We copped it in the neck in regional Australia for everyone to sleep soundly in metropolitan Australia and it is time our mob got repaid for it.”

Senior Nationals figure Darren Chester also noted that the Coalition should not forget that climate change policies can either support or create real problems for regional communities, which face the prospect of higher transport costs under some proposed “green” solutions. Further consideration is also needed regarding the National Party electorates from where big emitting industries export basic products and services, such as electricity and food, to the rest of Australia.

Littleproud said his party is on board with looking after the environment as long as the solutions don’t come at the cost of people: “We want to make sure our people, their jobs, are protected and they’ve got opportunities to be part of those renewable opportunities as well.”

The Nationals also came out on June 23 with a proposal to drastically change the Murray-Darling Basin Plan, which manages the water allocations between the food bowl regions of Australia in NSW and South Australia.

Under the plan, the Nationals want to strip 450 gigalitres of water that is earmarked for the environment, provided there are no negative social or economic impacts.

“For too long, our basin communities have been hurting; the science is now telling us the approach adopted 12 years ago is outdated and the plan must change,” said Nationals Senator Brigitte Mackenzie. “While we need to protect the environment, we also need to protect our food security.”