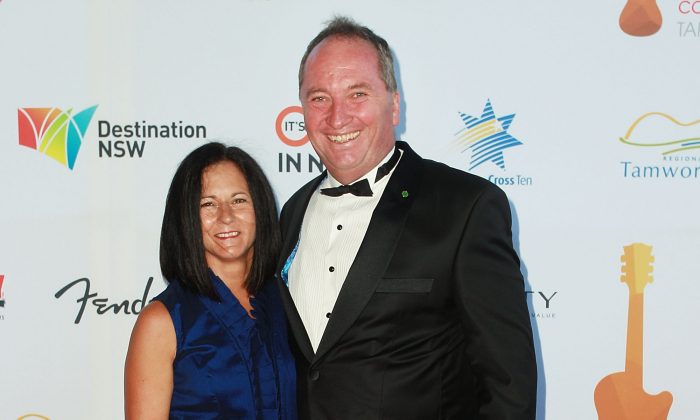 According to the Daily Telegraph, Natalie Joyce made her first public appearance since the scandal broke by attending a birthday party cruise for National Party donor Kirsty Berger on Saturday, Feb. 17.

Friend’s of Natalie said she is hesitant to give a major media interview because she hopes Barnaby can maintain his top position in the National Party.

At the party on Saturday, Natalie appeared happy as she posed for photographs with political lobbyist Michael Kauter and David Gracey.

Natalie has faced a difficult two weeks after the news broke about her husband’s affair with former staff member, Vikki Campion, who is pregnant with Joyce’s child. Natalie released a statement saying that the news was “devastating.”

“This situation is devastating on many fronts—for my girls who are affected by the family breakdown and for me as a wife of 24 years, who placed my own career­ on hold to support Barnaby through his political life,” she said.

As a result of the affair, Natalie’s trust in Joyce has been shattered, reported news.com.au.

Despite the pressure to resign, Joyce is standing his ground and refusing to leave his position as deputy prime minister.

He declared that he was “not going anywhere,” reported Fairfax.

“I’ve been in heaps of fights in my political life, this is another one, in any person’s political career you aren’t created by the times in your favour, you’re tempered by the times of adversity. That’s how politics works – you rise to deal with it,” he told Fairfax.

“I am humbled by the support in my electorate and in the community. People are starting to see this as a witch hunt. I’m not going anywhere, I never would.

“People know enough about me to know that I’m hardly one to run away from a fight,” he added.

Prime Minister Malcolm Turnbull has told The Australian that his wife, Lucy Turnbull, has reached out to Natalie.

“I know Lucy has contacted her, but I think it’s, it’s not something I would directly contact Natalie,” he told the newspaper.

“I mean I know Natalie obviously, but I think that’s … Luce has reached out, as have a lot of people, but these are very, very delicate and difficult matters and you have to conduct yourself in a way that tries to minimise or mitigate the pain that is already created,” Turnbull added.