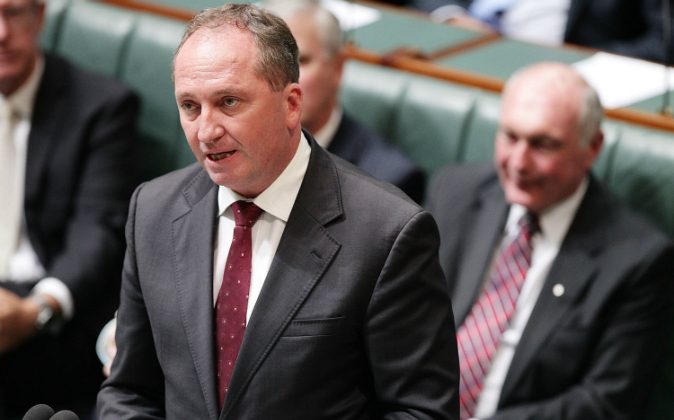 Australian Deputy Prime Minister Barnaby Joyce and his former media adviser, Vikki Campion, have given their first media interview together about their controversial affair that has drawn national attention.

In an interview with Fairfax, Joyce said the couple had endured malicious attacks and were pestered out of their rent-free apartment after their affair was swept up by national headline two weeks ago.

The couple now has a simple message to the public and politicians: “It’s time to move on.”

“This should be a very simple story — a bloke whose marriage broke down is in a relationship with another person and they are having a child,” Joyce told the newspaper.

“Now it seems to have gone into some sort of morality discussion. That’s between me and my God,” he added.

Joyce said he has made a commitment to Campion, who is pregnant with their child, and his relationship with her is not “other people’s business.”

“I don’t want to say ‘have sympathy for me’,” he told the newspaper.

“I just want people to look clinically at the facts and basically come to the conclusion he is not getting a gold star for his personal life, but he has made a commitment, he is with her, they’re having a child, and in a 2018 world there is nothing terribly much to see there.”

“I love my daughters. I have four beautiful daughters and I love them to death. And now I will have a son. I don’t pick winners, I’m not gonna love one more than another, but I’m not going to love one less than another either,” Joyce told Fairfax.

“I don’t want our child to grow up as some sort of public display. I have to stop it from the start. It’s a fact we are having a child, it’s a fact it’s a boy, it’s not more or less loved than any of my other children.”

“The one thing that has deeply annoyed me is that there is somehow an inference that this child is somehow less worthy than other children,” he added.

The couple said they were also going to move out of the apartment that was provided by friend and businessman Greg Maguire. They said that they wanted the interview with Fairfax to be conducted at the apartment to debunk the popular opinion that the apartment was a “palace.”

“Mate, this is a bachelor’s pad,” Joyce said during the interview.

Joyce’s six-month rent-free period at the apartment is estimated to worth around $14,000, reported Fairfax. It has been declared as “post-election residual of six-month tenancy on Armidale premises” in his register of interests – a public listing of any interests which may, or may be seen, to conflict with the MP’s duties.

The couple has spent only 14 nights at the apartment since January but said they needed to move out because they are being hounded by media, reported the newspaper.

The National Party leader has refused to resign despite some politicians calling for his resignation as Nationals leader. Joyce told Prime 7 that he still has the confidence of his party, reported the ABC.

“I believe I have the confidence of my party and the numbers in my party. I’m never scared of democracy, democracy is a wonderful thing,” he said.

Today, Nationals MP Andrew Broad called on Joyce to step down as party leader and go to the back bench, reported AAP.

Broad is the first federal National MP to call for his party leader to resign over the extramartial affair.

“It is time he takes a step back,” Broad told ABC radio on Feb. 22, reported AAP.

Joyce still claims that he did not breach the Ministerial Code of Conduct, and insists that Senator Canavan and Mr Drum were not savvy to his affair with Campion when she left Joyce’s office to work for them.

“No one ever asked us. Don’t ask, don’t tell. I wasn’t in breach of the code [of conduct]. We weren’t partners. I knew the ministerial code,” Mr Joyce said.

With the prime minister left to judge whether Joyce had been in breach of the Ministerial Code of Conduct, without any independent enforcement, Malcolm Turnbull ruled in favour of his deputy despite unleashing some harsh words and calling the affair with “a shocking error of judgment.”

Turnbull last week went on to amending the Code to ban any sexual relations between ministers and their staff.