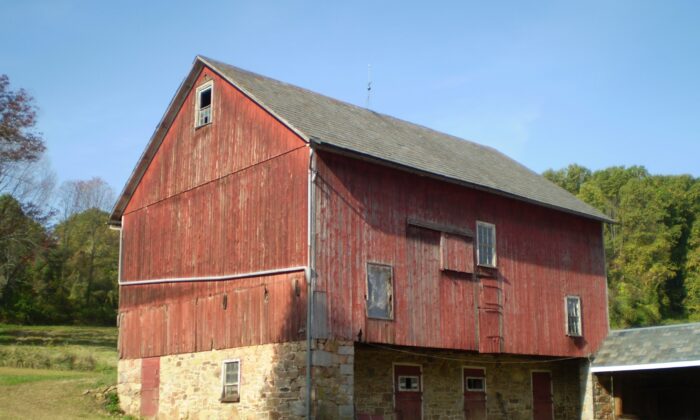 Barn Preservation May Be in Pennsylvania’s Future

Dotting Pennsylvania’s farmland, old barns tell agriculture’s timeless story of provision. From the small family farms that cropped up before the United States existed, to today’s large commercial operations, the barn has always been the heart of the farm, sheltering the work of growing food and fiber.

Home of sheep, cows, horses, or any animal a farmer raises; barns are places to store tools, seed, and feed; repair equipment; and teach children the ancient and modern methods of getting food to the table.

The most prevalent barn style in the state is called the Pennsylvania forebay barn, Huber said. It has three features including two levels, a “bank” or ramp to roll a loaded hay wagon up into the barn, and a “forebay” or cantilever section that creates an overhang of the second floor, beyond the stable wall.

This style started appearing in Pennsylvania in the 1730s and was a regional favorite, spreading into the Shenandoah Valley of what would become Virginia and West Virginia.

These were medieval-style structures held together with mortise and tenon joinery—a sturdy, labor-intensive wooden joint that involves carving precise fittings on the end of the timbers forming the barn’s skeleton.

But farming changed as the country become more populated. In the 1830s-1850s, Huber said, Pennsylvania farmers had to compete with farmers growing cheap food in Ohio, and new transportation. Canals and trains moved food and feed further, opening opportunities for selling more commodities and changing the way local farms operated.

Ancient-style barns of the 1700s didn’t meet the needs of this new economy and many were dismantled. That’s what happens when things become obsolete.

For example, many contracts from the 1600s exist in Pennsylvania and New York, Huber said, for the construction of a combined barn and house under one roof.

“Where are they? They are not around (Pennsylvania or New York). There are a few in Missouri,” Huber said. Without preservation, today’s remaining old barns may be gone one day too.

Pennsylvania state Senator Lisa Baker, a Republican, is calling for tax credits for the preservation of barns 50 or more years old.

“My goal is to help preserve Pennsylvania’s rich farming tradition,” Baker told The Epoch Times in an email. “Our historic barns are a key component of that legacy. This program will offer an important incentive to help retain and improve these structures for generations to come.”

Agriculture has been, and remains a cornerstone of our economy, Baker said in a memo proposing the legislation. Historic barns represent our past, present, and future, and symbolize the heart of the family farm.

Old barns remind us of the people who made a living and built a life through agriculture. They echo laughter from the hay rafters, cats sleuthing for barn mice, the births of calves and colts, and the bittersweetness of passing the property to a new generation.

Luke Brubaker of Brubaker Farms in Lancaster County became that new generation in 1976 when he bought an old home and stone bank barn dating back to the 1700s.

In the 1900s the barn was used as a chick hatchery.

“The barn was sitting there, one of those old barns—you don’t know what to do with them. They don’t always fit the situation unless you make some changes,” Brubaker told The Epoch Times.

He decided to offer farm tours and made the former chick hatchery a meeting place for anyone interested in learning about agriculture. The second floor has a board room and farm offices constructed with a modern feel mixed with touches of rustic barn beams and stone walls.

When he considers the barn is around 300 years old, Brubaker thinks about the hard work that went into its construction.

“You have all that heavy lumber in the barn,” Brubaker said. “And a tunnel-like a brick arch probably 50-feet long, used in old days to store potatoes so they would not freeze in the winter.”

But mostly he thinks about the stone foundation and the rocks builders must have heaved from the nearby field in horse-pulled carts.

“That takes vision and hard work to get something like accomplished,” Brubaker said. “That is really special.”

Pennsylvania Farm Bureau has been advocating for legislation that would remove a barrier for farmers who want to use historic barns to host weddings and other social events on the farm, Migdail said. Senate Bill 191 would establish a statewide standard for allowing older barns to be used for events, which is now left up to local governments.

Some farmers who have sought to use their barns for events have been told by local governments that they must retrofit their barns with commercial sprinkler systems, which is cost-prohibitive and, in many cases, nearly impossible in rural areas without municipal water. In other cases, farmers have been able to work with local officials to avoid having to install a sprinkler system as long as they take other steps to ensure safety. The bill would set a statewide standard that allows older barns to host events without a sprinkler system as long as certain safety measures are implemented.

“We believe this is an important step towards helping farmers take advantage of growing public interest in agriculture so they can generate additional revenue to both preserve their historic structures and keep their farms viable for future generations,” Migdail said.

For those driving through farmland, old barns both retired and those still in use, capture the imagination.

“Why so are they so evocative? We want to know where we came from,” Huber said. “There is an aura about history. We visualize what activities happened there.  I think barns are particularly that way. It satisfies a curiosity. Our minds extend not only in the future, but also the opposite way. We want to complete the thought. It’s a completion of where we came from.”