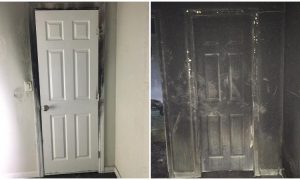 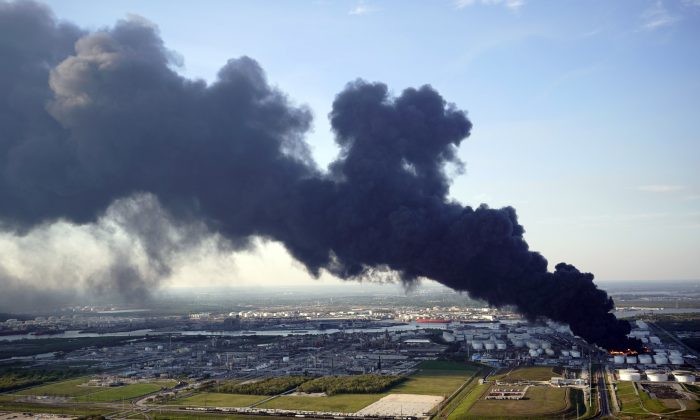 A plume of smoke rises from a petrochemical fire at the Intercontinental Terminals Company in Deer Park, Texas, on March 18, 2019. (David J. Phillip/AP Photo)
US

As a petrochemical fire near Houston belched black smoke 4,000 feet into the sky, a wannabe fireman turned up barefoot, equipped with a garden hose and a foil suit only to be turned away by police, according to local reports.

A photograph of the man stirred amusement and interest on social media after it was first published by KHOU, with little explanation other than the fact that he called himself “Earth-man.”

The photo came from a freelance journalist covering the three-day fire that spewed toxic organic compounds into the air, according to KHOU.

As if first responders didn’t have enough on their hands with the Deer Park fire, a wanna-be firefighter calling himself “Earthman” had to be turned away by police.

Social media users quickly had fun with the picture of the barefoot Earthman coming to the rescue.

“Why the hell would you turn away EARTH MAN!!,” wrote one. “Now were really screwed”

“One Flew totally out of the Cookcoo’s with this fella!” wrote one.

Others seemed to think there might be something else going on.

“The greatest troll that ever lived,” wrote another. “Thank you for the entertainment sir. I’m sorry people are too stupid to appreciate real life humor.”

The fire erupted on March 16 at Intercontinental Terminals Company in Deer Park, about 15 miles southeast of Houston, reported The Associated Press, as 34,000 residents were ordered to stay put.

Residents were told to remain indoors again on March 21 due to high levels of volatile organic compounds in the air.

But the news photographer wasn’t the only one to take a picture of Earthman at the fire that day.

Earthman himself, aka Dion Laurant, also posted a few snaps on social media of himself with the plume of black smoke rising behind him.

“EarthMan 2, here in Deer Park, Texas, hose in hand and ready to extinguish the ITC chemical fire,” wrote Laurant on a Facebook post. “Be patient folks, I’ll get this disaster under control even though the damage is already done.”

Earthman (or more accurately Earthman 2) it turns out, claims to be a piece of performance art—although the descriptions hardly dispel the troll theory.

EarthMan 2, here in Deer Park, Texas, hose in hand and ready to extinguish the ITC chemical fire. Be patient folks, I'll get this disaster under control even though the damage is already done.

According to Laurant’s website EarthMan 2 is a performance piece which “allows the viewer to consider our global biosphere on a human scale.”

“I blend art & science by appearing in public places wearing a fully-functioning, self-sustaining suit conceptually capable of maintaining a human in otherwise unlivable environments on earth or even in outer space,” continues the website.

“EarthMan performances may involve the planting of trees, the handing out of flowers, broadcasting seeds, and various other activities concentrating more on involving related works of art, environments, and interaction as symbolism, or just passing through environments whether human populated or not.”

“By re-appropriating conventional icons – or ‘popular images’ – for specific intentions, Laurent’s work resonates with the environmental tenets of ‘wake up’ and ‘act globally.”