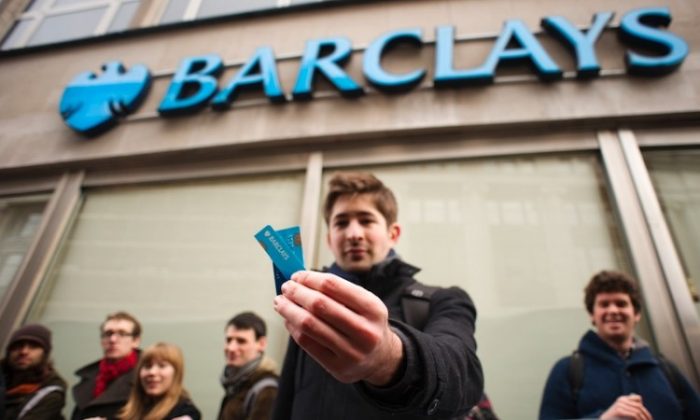 Barclays customer George Gabriel holds the pieces of his cut-up bank card during a protest outside a branch of Barclays bank in central London on February 10, 2012. The protest was a part of the "Move Your Money" campaign, the stated aims of which are to try to create what they consider a better banking system through consumer power. Barclays announced a 16-percent drop in annual net profits to 3.0 billion British pounds on falling revenues at its investment arm, and also announced a one-quarter cut in its bonus pool on February 10. (Leon Neal/AFP/Getty Images)
US

The Treasury has ordered Barclays Bank to pay half-a-billion pounds in tax, which it claims the bank has deliberately avoided paying.

The government has accused the bank of using two schemes to exploit loopholes in the tax system, which were disclosed to the Treasury when the government changed the rules on tax.

Barclays says that it has always complied with the letter and spirit of banking codes on taxation, and had voluntarily disclosed the schemes.

But the government is unusually clawing the money back through the introduction of retroactive legislation, which will be brought to bear on the past activities of the bank.

Exchequer Secretary to The Treasury David Gauke said the bank should never have devised the schemes in the first place.

“We do not take today’s action lightly, but the potential tax loss from this scheme and the history of previous abuse in this area mean that this is a circumstance where the decision to change the law with full retrospective effect is justified,” he said in a statement.

One of the two schemes involved the bank avoiding paying tax on profits made when buying back IOUs. The second scheme set up by Barclays involved investment funds claiming tax credits on non-taxable income.

The Treasury described this as “an attempt to secure ‘repayment’ from the Exchequer of tax that has not been paid”.

The rules, which obliged the bank to disclose the two schemes, have been in place since 2004.

Under the rules, any apparently legal tax avoidance scheme must be disclosed to authorities within days of it being put to use or sold to clients.

Barclays said in a statement: “Barclays ensures that all transactions that it undertakes are fully in accordance with relevant tax law wherever it does business. In the UK we comply with the letter and spirit of all our obligations.”

According to Barclays the situation stems from the bank’s voluntary disclosure that it had repurchased some of its debt “in a tax efficient manner”. The bank says it received guidance from professional advisers that this was “both legal and compliant with the tax code”, and that others had used a similar treatment.

“Barclays respects the decision of HMRC and the government to adjust the tax laws and will, of course, comply with the modified law once it is in place.”