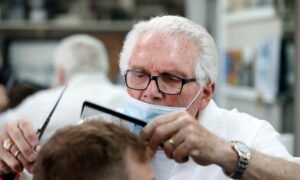 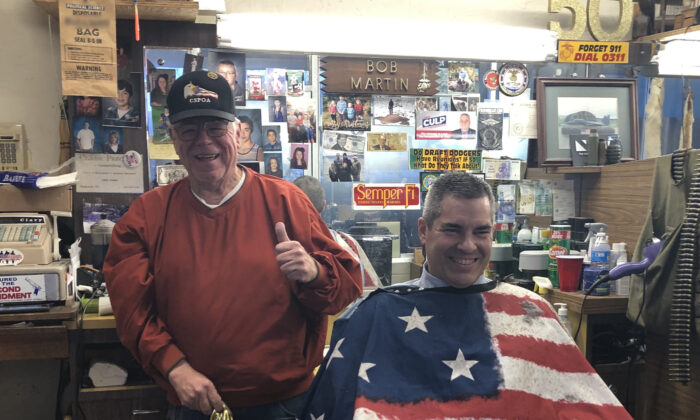 Barber in Washington Fights Fines of Up to $90,000 and License Suspension

SNOHOMISH, Wash.—A barbershop owner has said he will continue to fight for his constitutional rights after being asked to cease operations and having his license revoked by the state.

Bob Martin, owner of Stag Barber & Styling in Snohomish, a small town in Washington about 35 miles northeast of Seattle, received a second cease-and-desist letter from the Department of Licensing (DOL) recently for operating his business without a permit.

Almost since the beginning of the pandemic, he has refused to close his shop or enforce mask mandates on customers.

The DOL suspended Martin’s cosmetology license on May 7, 2020. They revoked it for 10 years. Martin is also facing fines piling up to the limit of $90,000.

But the retired Marine has responded firmly by keeping the shop open and continuing to fight for what he believes to be his constitutional rights.

Martin opened his shop in 1969 as the first tenant at the Snohomish Square Shopping Plaza when the town still mostly consisted of farmland. He has been giving haircuts to people both inside and out of his small hometown for over 60 years.

Then the pandemic hit, forcing the 80-year-old barber to drop his scissors and close his doors.

Barbershops are now open at a limited capacity, but they were shut down last spring under Washington Governor Jay Inslee’s statewide order.

However, Martin needed money and didn’t want to ask for a government handout, so he decided to resume his business last April after a two-week closure. This brought him both troubles and praise.

At first, he did it secretly. He said he felt like a criminal operating his own business.

On April 21, 2020, the Snohomish County sheriff announced he would not enforce Inslee’s stay-at-home order. Martin publicly opened his shop the next day.

Then, in May, the Washington State DOL revoked Martin’s license, which would have been valid through June 2021, and served him a cease-and-desist order.

On the same day, the Snohomish Health District sent Martin a certified letter ordering him to stop cutting hair or face fines or possible criminal charges.

Martin refused to abide by the order.

“The mandate is an edict that the governor had. [It] is not a law, it was not voted on, it wasn’t passed into law, and it’s against the law, against the Constitution, for them to try to enforce something like that,” Martin told The Epoch Times. “They tried to put me out of business here and fine me, and my question is, who’s the injured party? I didn’t hurt anybody.”

“I’m not going to put up with anybody that is trying to put me out of work,” Martin said.

Having grown up in Snohomish, Martin said he knew he would have an easy time doing business with the community, because people knew who he was.

Martin pointed to the framed photocopy of the Constitution hanging on his wall.

“The Constitution gives me the right to [fight] for liberty, and I took an oath of office, when I went in the Marine Corps, for enemies foreign and domestic, and these are domestic problems right now,” he said. “We don’t want to have a country like China’s enduring now with the communists.”

He keeps his door open not just for the Constitution, but also for the sake of his family.

“I just want to take care of my daughter and my grandson,” he said. “My daughter has a brain tumor; she needs my help, and I need to help her. So she’s not employed, nor is my grandson yet. He was, but he lost his job because of the COVID thing. So I’m the only one with a sole income, and I have to help him.”

In November, groups of masked men threatened to burn the shop down.

Coincidentally, two or three weeks later, Martin’s home caught on fire. He is currently staying in a motel with his daughter. However, after the police investigation, he doubts that it was arson.

Though Martin’s outspokenness has garnered him some troubles, he continues to receive an outpouring of support from the community.

Some of the customers waiting in line said that Gov. Inslee only made an order, not a law. They said that when it’s a law, they’ll respect it.

Most of them expressed their willingness to support Martin’s business and enjoy the familial atmosphere the shop offers, and they have great respect for Martin.

“It’s like one big family. I feel like all the kids’ grandpa in town. The little kids who sat on the board down there are now bringing in their grandchildren, so that’s how long I’ve been here,” Martin said with a smile.

The barbershop has received support from people from all over Washington, with some even traveling northward from Oregon. On Feb. 6, one couple drove 60 miles from Tacoma, Washington, just to get a haircut. They said they were there to support the Constitution and the barbershop.

Martin said that his persistence now has nothing to do with himself. It’s all about “us,” the community and people, and it’s all about the Constitution and rights.

“We’re sons and daughters of people who founded this country, and we’re not going to sit back and let them walk all over us. So if they want to fight, we’re going to give it to them,” Martin said.

Martin is continuing business as usual and plans to do so for the foreseeable future.

“I’m just this red-blooded American; I’m not any different than any other person,” he said. “I’m the only one that’s just vocal. I end up being the mouthpiece for the people that don’t want to stand up.”

Note: A previous version of this article incorrectly stated the amount of the fines. Martin faces up to $90,000 in fines. The Epoch Times regrets the error.