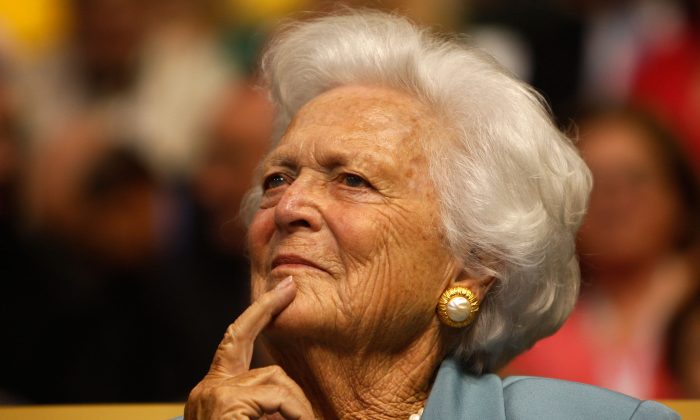 Family spokesman Jim McGrath on wrote on Twitter Sunday that the 92-year-old matriarch made the decision after consulting with her family and friends.

Statement by the Office of George H. W. Bush on the health of former First Lady Barbara Bush. pic.twitter.com/4csUS6IRKZ

“It will not surprise those who know her that Barbara Bush has been a rock in the face off her failing health, worrying not for herself—thanks to her abiding faith—but for others,” he wrote.

She “will instead focus on comfort care,” the statement said, Reuters reported.

Her husband, George H.W. Bush, was the country’s 41st president. He’s now 93 years old and struggling with a Parkinson’s-like disease, and is confined to a wheelchair.

Former President George W. Bush served from 2001 until 2009 before retiring to Texas.

“At the end of your life, you will never regret not having passed one more test, not winning one more verdict, or not closing one more deal. You will regret time not spent with a husband, a friend, a child, or a parent." – Barbara Bush

The brief statement did not indicate the nature of Bush’s illness but said that she had had a series of recent hospitalizations, noted Reuters.

CNN reported that Bush was suffering from chronic obstructive pulmonary disease (COPD) and congestive heart failure. A Bush family spokesman said she was being cared for at her home. He did not provide information on the nature of her illness.

“She is surrounded by a family she adores and appreciates the many kind messages and especially the prayers she is receiving,” the statement added.

Prayers going up for a woman of great faith, great strength, and an unwavering love of country. Our country is better because of former First Lady Barbara Bush ❤️?? pic.twitter.com/pewdIu2hjr

Her other son, Jeb Bush, ran unsuccessfully for president in 2015 and early 2016 before dropping out. He was the Republican governor of Florida.

In April, the former first lady wrote glowingly of her husband.

I am sending all my love and prayers to the entire Bush family today – Barbara Bush is a woman of great strength, patriotism and an iconic first lady of our times who has touched and inspired countless lives.

“I am still old and still in love with the man I married 72 years ago,” she wrote in the Smith’s College’s alumnae magazine, as reported by USA Today. “I have had great medical care and more operations than you would believe,” she also told the magazine. “I’m not sure God will recognize me; I have so many new body parts!”

She continued: “Also, George Bush has given me the world. He is the best—thoughtful and loving.”