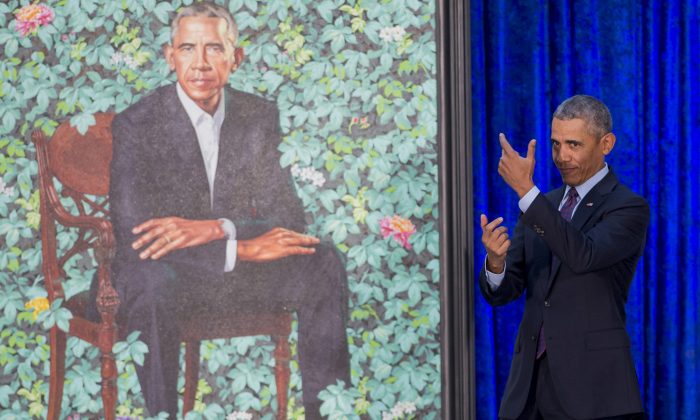 US President Barack Obama pretends to take a selfie as he looks at his by artist Kehinde Wiley after its unveiling at the Smithsonian's National Portrait Gallery in Washington, DC, February 12, 2018. (Photo credit should read SAUL LOEB/AFP/Getty Images)
US News

Barack Obama’s Portrait May Have Been Made in China: Report

A recently-revealed portrait of President Barack Obama may have been made in China, according to a new report.

Artist Kehinde Wiley was commissioned to paint the portrait of Obama and his wife, Michelle Obama.

Wiley’s portrait shows the former president sitting on a chair in front of a wall of greenery and flowers.

But sources told the New York Post that Wiley has multiple studios in China and does the bulk of his work there.

“It’s his base of operation,” art critic Charlie Finch, who was a student with Wiley at Yale University, told the outlet. “He has dozens of assistants working for him.”

Finch indicated that Wiley normally sketches out the most important parts of a work and has his assistants fill out the rest.

Wiley may have completed the important parts while Obama was sitting for him, but the portrait may have then been sent to China for the assistants to finish, according to the Post.

Wiley didn’t respond to a request for comment from the outlet.

On his website, Wiley said that a set of paintings called “World Stage China” came as a result of an invitation for him to start a studio in Beijing. One of the paintings featured on his website shows an African American smiling while reading a book by Chinese communist dictator Mao Zedong.

New York Magazine reported that Wiley’s first studio in China was opened in 2006.

The magazine conducted an on-site interview with the artist and noted that the subject of his assistants made him uncomfortable. “I’m sensitive to it,” he said.

The assistants were all sent away before the reporter and photographer arrived at the Beijing studio. He acknowledged freely that he has assistants. “I don’t want you to know every aspect of where my hand starts and ends, or how many layers go underneath the skin, or how I got that glow to happen,” he said. “It’s the secret sauce! Get out of my kitchen!”