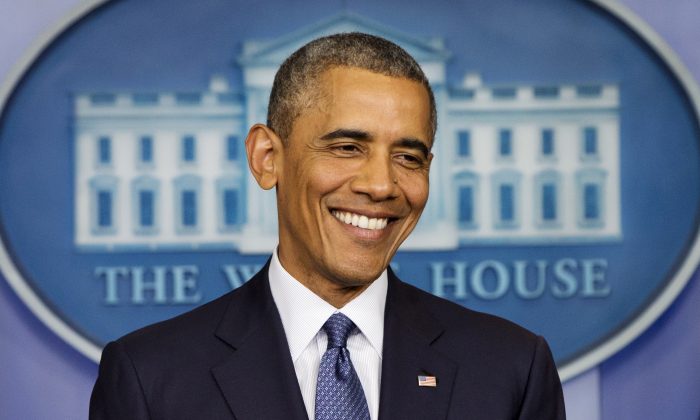 This Aug. 1, 2014, photo shows President Barack Obama as he smiles near the conclusion of a news conference in the Brady Press Briefing Room of the White House in Washington, Friday, Aug. 1, 2014. President Barack Obama is starting his birthday weekend with a round of golf before escaping to the Maryland mountains. Obama turns 53 on Monday. In what's become an annual birthday tradition, he's joining friends on the green for an early morning round at Andrews Air Force Base in suburban Maryland. He'll board Marine One later Saturday for the short helicopter flight to Camp David, the presidential retreat in the Catoctin Mountains. (AP Photo/Jacquelyn Martin)
US

Barack Obama’s birthday is on August 4, and he will be turning 53 years old this year.

Obama is said to have been born at the Kapi’olani Maternity and Gynecological Hospital. Critics allege that he has previously said he was born at Queens Medical Center. Both hospitals are in Honolulu, Hawaii.

The birth certificate says that Obama’s mother is Ann Stanley Dunham, a Caucasian, while his father was Barack Hussein Obama, an African. Ann was born in Wichita, Kansas while Barack was born in Kenya, East Africa.

“He was raised with help from his grandfather, who served in Patton’s army, and his grandmother, who worked her way up from the secretarial pool to middle management at a bank,” according to his official White House bio.

“Obama did not have a relationship with his father as a child. When his son was still an infant, Obama Sr. relocated to Massachusetts to attend Harvard University, pursuing a Ph.D. Barack’s parents officially separated several months later and ultimately divorced in March 1964, when their son was 2. In 1965, Obama Sr. returned to Kenya,” adds Biography.com.

“In 1965, Dunham married Lolo Soetoro, an East–West Center student from Indonesia. A year later, the family moved to Jakarta, Indonesia, where Barack’s half-sister, Maya Soetoro Ng, was born. Several incidents in Indonesia left Dunham afraid for her son’s safety and education so, at the age of 10, Barack was sent back to Hawaii to live with his maternal grandparents. His mother and sister later joined them.”

His dominants include Leo, Aquarius, and Gemeni while his numerology is Birthpath 11.

WASHINGTON—President Barack Obama opened his birthday weekend on Saturday with a round of golf with friends before escaping to the Maryland mountains.

Obama turns 53 on Monday. In what’s become an annual birthday tradition, he joined friends on the green for an early morning round at Andrews Air Force Base in suburban Maryland, where the clouds threatening rain held off long enough for the president to get in 18 holes.

Rounding out his foursome were presidential pals Mike Ramos, Bobby Titcomb and Greg Orme, the White House said. All three are longtime friends dating back to Obama’s childhood in Hawaii.

Although they teed off against eight other golfers, Obama and his team finished with the winning score, the White House said. In another birthday ritual, that victory earned Obama’s three teammates a ride with the president aboard Marine One for the short flight to Camp David, the presidential retreat in the Catoctin Mountains.

Also aboard the president’s helicopter: Obama personal trainer Cornell McClellan. The other golfers, who weren’t identified by the White House, were expected to travel to Camp David by car.

The White House didn’t say what Obama had in store for the rest of his birthday weekend or whether first lady Michelle Obama would be joining him. Obama planned to return to the White House on Sunday afternoon.