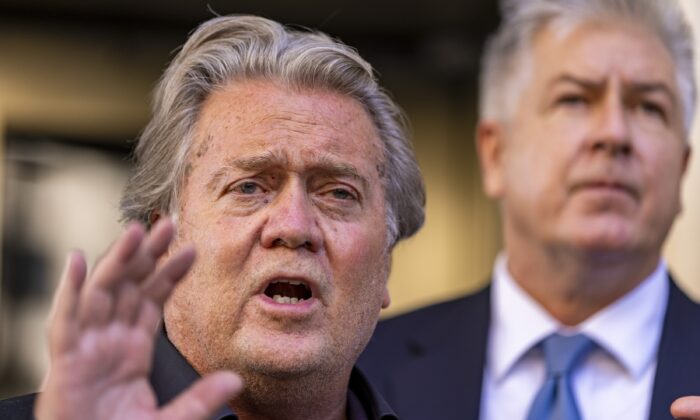 Former White House Chief Strategist Steve Bannon speaks to the media as his lawyer Matthew Evan Corcoran looks on after his trial for contempt of Congress began at the U.S. District Courthouse in Washington on July 19, 2022. (Tasos Katopodis/Getty Images)
Congress

He is on trial for allegedly defying subpoenas issued by the House of Representatives committee that’s investigating the breach of the U.S. Capitol, which occurred on Jan. 6, 2021.

Bannon ignored warnings that he could face criminal prosecution if he did not comply with the subpoena, prosecutor Amanda Vaughn said.

“When you ignore a subpoena, that’s a crime,” she said. “That is why we are here today.”

But Evan Corcoran, a lawyer for Bannon, challenged that narrative, saying that the subpoena was not ignored.

The evidence will show there was “direct engagement” and prolonged negotiations between lawyers for Bannon and the government because of questions about what materials and testimony Bannon could give, Corcoran said.

There will also be no evidence that shows Bannon “willfully defaulted when he didn’t appear in a congressional office on Oct. 14,” Corcoran said. “The date was the subject of ongoing discussion and negotiation, so the government can’t prove beyond a reasonable doubt that Steve Bannon committed a crime.”

After Bannon didn’t appear before Congress in October 2021, the House voted to hold him in contempt, and a grand jury indicted him several weeks later on two counts of contempt of Congress.

Rep. Bennie Thompson (D-Miss.), chairman of the panel, said a day after the failure to appear that Bannon had “willfully failed to both produce a single document and to appear for his scheduled deposition.”

Bannon has said he couldn’t hand over materials or testify because the subpoena sought records protected by executive privilege, which had been asserted by former President Donald Trump. His lawyers said that Bannon wouldn’t testify until the panel reached an agreement with Trump, or a court ruling settled the matter. Thompson said that Bannon, who was a Trump aide in 2017, could still testify about and produce documents relating to matters outside of the privilege.

Vaughn, the prosecutor, said that the case “is about a guy who refused to show up.”

While others have been held in contempt of Congress over the years, the choice to prosecute Bannon on the matter is unusual. The last criminal contempt case took place in 1983, according to the Congressional Research Service.

Bannon, who the committee believes has information about efforts to block the certification of the 2020 presidential election, is being targeted by the Democrat-dominated panel because of politics, Corcoran said.

“Politics is the lifeblood of the U.S. House of Representatives,” he told the jury. “They stand for reelection every two years.”

Members “are perpetual candidates for Congress and politics pervades everything they do,” he added later.

Bannon faces up to two years in prison and a fine of up to $2,000 if convicted.

Corcoran noted that the vote in Congress to hold Bannon in contempt was close, and told jurors to think about the political aspect when weighing evidence.

“Ask yourself: Is this piece of evidence affected by politics?” he said.

Amerling, the first witness, said that the committee’s authority ends when the next Congress is seated in January 2023, making it important for people who are asked to provide information to comply with deadlines.

In the view of committee members and staff, Bannon played multiple roles related to the events on Jan. 6, including his attempts to persuade the public that the election wasn’t legitimate, Amerling said.

The subpoena required him to provide documents by Oct. 7, 2021, and to appear before the committee a week later, and he did neither, Amerling testified.

Bannon told reporters that Thompson “didn’t have the guts to show up here and he sent a staffer.”