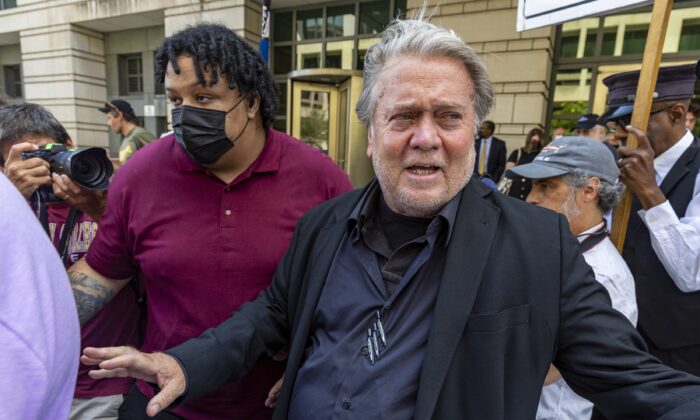 Republicans need to launch a congressional committee to investigate the Jan. 6, 2021, breach of the U.S. Capitol and how the events of that day were handled, Steve Bannon said on July 22.

The panel should also probe the House of Representatives special panel currently probing Jan. 6, he said.

If Republicans flip the House in the midterm elections, then “we have to really govern, govern on offense,” Bannon said on Fox News, speaking hours after he was convicted on two counts of contempt of Congress.

“Every committee in the House has to be an oversight committee,” he added later. “And we have to have a real Jan. 6 committee, including to get to the staffers now, and see about the lies and misrepresentations they put on national television to defame people. I would tell the Jan. 6 staff right now preserve your documents, because there’s going to be a real committee and this is going to be backed by Republican grassroots voters and MAGA who are going to say, ‘we want to get to the bottom of this for the good of the nation.'”

Pressing questions include whether Ray Epps, a man seen urging people to enter the Capitol, was an FBI asset, and the circumstances surrounding the shooting of Ashli Babbitt, who was shot dead by a police officer, Bannon said.

Jurors earlier Friday convicted Bannon, placing him in jeopardy of serving prison time. The charges stemmed from his refusal to comply with a subpoena issued in 2021 by the House Jan. 6 panel.

Each count carries up to one year in prison.

“The subpoena to Stephen Bannon was not an invitation that could be rejected or ignored,” Matthew Graves, the U.S. attorney for the District of Columbia, said in a statement. “Mr. Bannon had an obligation to appear before the House Select Committee to give testimony and provide documents. His refusal to do so was deliberate and now a jury has found that he must pay the consequences.”

Bannon’s lawyers have said they plan to appeal.

“When a former president or a current president invokes executive privilege. It’s presumptively valid period. It’s not for Congress to decide that is not valid,” David Schoen, one of Bannon’s lawyers, told reporters after the verdict was announced. Schoen also said Bannon was following the advice of his lawyer.

U.S. District Judge Carl Nichols, the Trump appointee overseeing the case, previously ruled that Bannon could not say he was relying on the executive privilege that former President Donald Trump asserted, or advice from his lawyers, while rejecting efforts to subpoena House Speaker Nancy Pelosi (D-Calif.) and the House members who serve on the Jan. 6 panel.

Bannon chose not to take the stand in his own defense, and the defense called no witnesses.

“I had top lawyers. They wouldn’t even let it be that I could rely on the opinion of my lawyer. Here, they took away every possible defense that somebody can have, a defense of law. That’s why we didn’t even put on the defense. We just had an opening argument and a closing argument,” Bannon said on Fox.

“We got a long appeals process. … I think the law is with us on a number of situations. I think some of this is really going to be adjudicated, maybe even higher than the appellate courts. I’m very confident that we’re 100 percent right on the law, but I’m going to fight this all the way,” Bannon said.

Iris Tao contributed to this report.