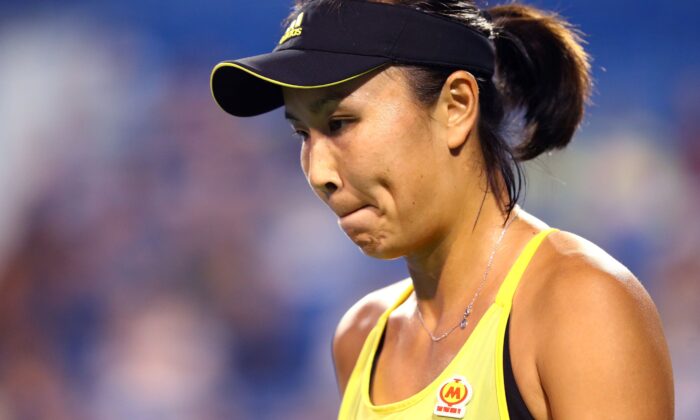 Shuai Peng of China looks on during her match against Agnieszka Radwanska of Poland on Day 7 of the Connecticut Open at Yale in New Haven, Conn., on Aug. 24, 2017. (Maddie Meyer/Getty Images)
Australia

Banning ‘Where Is Peng Shuai?’ T-shirts Is ‘Safe and Inclusive’: Tennis Australia

Tennis Australia (TA) has again defended its decision to block fans from wearing t-shirts with slogans supporting Chinese doubles player Peng Shuai at Melbourne Park, saying the decision is to create a “safe and inclusive” environment.

The organisation has been under scrutiny after the footage made its way to social media last Friday showing a TA’s security guard confiscated a pro-Peng Shuai banner from two spectators and asked them to remove their “Where is Peng Shuai?” t-shirts.

Within three days following the incident, a Go Fund Me page has raised over A$15,500 for printing 1,000 shirts emblazoned with the message, which will be distributed on Saturday at the Australian Open’s (AO) women’s final. The organiser, human rights activist Drew Pavlou on Monday said his group “basically raised our voice for this innocent woman who’s being persecuted.”

In a statement to The Epoch Times on Monday, TA said it would continue to prohibit “any items that compromise the safety and comfort” of AO spectators. However, the organisation did say they would be “happy to welcome the patron back” to Melbourne Park.

TA added that Peng’s safety remained its “primary concern,” and it continued to work with Women’s Tennis Australia and the global tennis community to do “everything we can to ensure her wellbeing”.

“We understand and appreciate that people have strongly held personal and political views on a range of issues,” a TA spokesperson said.

“To ensure that the Australian Open remains a welcoming, safe and inclusive event for everyone, we have a longstanding policy of not allowing banners, signs or clothing that are commercial or political.”

“On this occasion, the security guard was simply enforcing this policy.”

TA’s reasoning, according to University of Queensland emeritus law professor Gabriel Moens, is “merely speculative” as any riot that could occur would quickly be dealt with by AO’s security and police.

Moens argued that the Australian constitution prevents the Parliament from “making a law that would abridge freedom of speech,” and since the TA receives “substantial governmental assistance,” it is also expected to value free speech.

“It is instructive to note that what is “political” is very much a matter of subjective perception. It’s an empty vessel, the meaning of which must be filled in by policymakers and trendsetters,” the professor wrote in an op-ed on The Epoch Times on Jan. 24.

“One wonders whether a message like “Go Home, Djoker” would be deemed to be a political message, considering the controversial deportation of Novak Djokovic.”

Hongkonger Australian activist Max Mok, who recorded the video, said the level of Chinese sponsorship at the AO made him  “extremely” uncomfortable.

“The possibility that I seem to think is likely is that it’s been flagged, the Peng Shuai situation, talking against China in general,” he told Sky News on Monday.

“It’s been flagged by the Australian Open and Tennis Australia authorities even before we went there simply because of the sheer number of Chinese sponsorships they’ve got.”

In 2019, TA named one of its courts “Arena 1573” in honour of the year Liquor brand Luzhou Laojiao dates back to.

The safety of Peng, an Olym­pian and former World doubles No. 1, continues to concern the global tennis community after she alleged sexual assault by former Chinese vice-premier Zhang Gaoli on Weibo in November.

Her posts were immediately removed from the social media platform before she disappeared from the public eye for nearly three weeks.