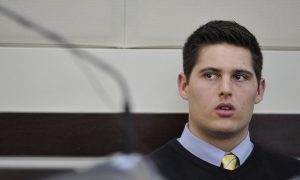 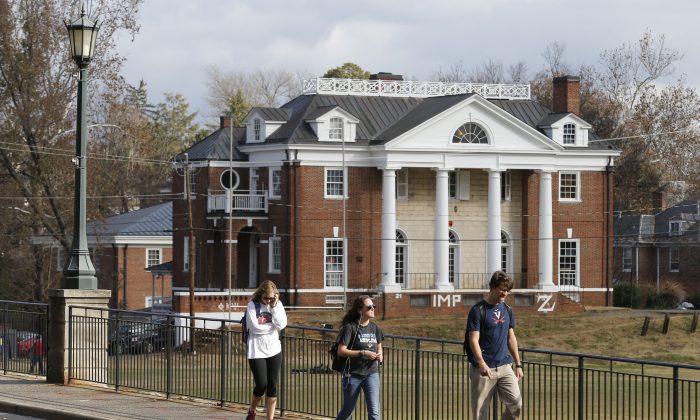 Students walk to campus past the Phi Kappa Psi fraternity house at the University of Virginia in Charlottesville, Va. on Nov. 24. Rolling Stone published a story alleging a rape by seven members of Phi Kappa Psi in November. (AP Photo/Steve Helber)
US

The Violence Against Women Act requires colleges to prevent sexual violence and rape. There are ways to do that and ways not to do that.

The University of Virginia proposed to keep sorority members safe from rape by not letting them go to Boys’ Bid Night fraternity parties for new pledges this Saturday.

The university and the fraternity Phi Kappa Psi were targets of a poorly reported, discredited Rolling Stone story that described a brutal, violent, sexual assault. The fraternity was sanctioned in November 2014 and reinstated January 12, after police said they could not substantiate the victim’s story.

So the gun-shy university and Greek organizations decided the way to keep women safe from rape was to keep them out of the picture. This is not respectful.

“Our concerns lie in the way sorority women are being used as leverage to change the actions and behaviors of fraternity men. This resolution has misconstrued us as a passive aggregate rather than active agents for change. It has also had the unintended consequence of subjugating women,” said a petition to the National Panhellenic Conference International and National Presidents, from sorority members and students at the University of Virginia.

“The mandate suggests, inadvertently perhaps, that women should not and cannot exist in certain spaces.”
— Sorority members and students, University of Virginia

They wrote that they wanted to make their own choices, and that sororities were meant to empower women. “The mandate suggests, inadvertently perhaps, that women should not and cannot exist in certain spaces.”

You have to ask, what country are we in again? Is it ruled by the Taliban? I did not think so. We can fly kites and drive cars and play music and walk around and attend parties. The way to prevent rape is not to hide women away. It is to respect us.

Dr. Laura Salazar, associate professor of health promotion and behavior at Georgia State University’s School of Public Health, studied the attitudes of college men. She did that to develop web-based training to reduce sexual assault and help people intervene to prevent it. Some college men are wonderful, respectful, and pro-feminist, she said. Some are not. She measured their attitudes by asking how they would feel about having a female boss or about a woman being elected president. Some responded to that question with off-color jokes. Those are the ones who need more education.

It makes me think of the story Sir Gawain, one of King Arthur’s knights. He had to keep a promise to marry a woman who was cursed with the face of a beast. She looked like a monster half the time—either by day when in public, or by night when alone with him. She told him that he could lift the curse. The way to lift it was to choose correctly: should she look human in the daytime or at night?

Sir Gawain said, “It must be your choice.”

When he said that, she was freed from the curse.